I have reported how Valentino, in his final hours of life, whispered something to Frank Mennillo. Mennillo shared this secret only with Alberto Valentino. I have also reported on what I feel Valentino said to his godfather Frank and how Alberto reacted.

But today I ask...was Valentino's whisper not a blessing on Frank... now existing as evidence of Valentino's eternal acknowledgment Frank was considered family, that Frank was to be trusted, evidence that Frank was the godfather? There is something sacred in that recorded moment. Valentino chose Frank as guardian of his secret.

For those who demean themselves by demeaning and belittling this “great comrade” Frank Mennillo, I share the following. This is not "fabrication" it is fact: Frank Mennillo was certainly there when Valentino died. Valentino died in his godfather's arms. 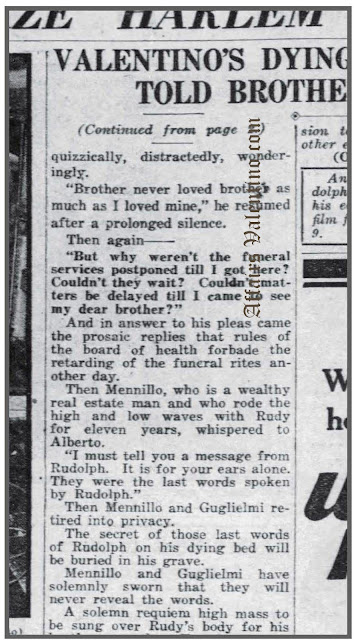