Affairs Valentino - And that Fairness Lien

For me the most glaring travesty in the story of S. George Ullman was revealed in this excerpt from the California Court of Appeals (see below). Although George Ullman was exonerated on all of Alberto Valentino's frivolous charges of fraud and mismanagement of his brother Rudolph's estate, the California Court of Appeals issued a unique solution to the issue of the estate funds George disbursed to those he believed to be the rightful heirs.

The Court of Appeals recognized Ullman acted in good faith in disbursing the funds as he did not have access to the entire will and that sheet of instructions, Paragraph Fourth. In regards to the money George advanced before the discovery of Paragraph Fourth, the Court ruled that those people who did benefit from those advances made by Ullman, being Alberto, his sister Maria and Teresa Werner.. that they establish a “Fairness or Appropriate Lien” and settle the issue among themselves at the time Jean Valentino inherited the estate when he turned twenty-five. The final verdict stated they should logically not hold Ullman responsible to repay the estate money to the very people who benefited from it.

Well the “Fairness Lien” no doubt sounded like a “fair” solution to the appeals court judges. But how naive of the court to assume this would happen. Neither Valentino's sister Maria Strada or Teresa Werner pursued Ullman in any collection process and respected the Appeals Court decision. It was Alberto Valentino, who at the time was making the decisions for the estate, who refused to establish the “Fairness Lien”. In a twisted act of legal loop hole, he instead pursued Ullman for thirty years trying to collect the money he already spent years earlier. Why? I guess because he could.

And while he was harassing Ullman with wage garnishment orders and property seizure, Alberto was crying on the shoulders of anyone who would listen, telling them he received only pennies from his brother's estate and every other penny went to lawyers. According to the final will, which included Paragraph Fourth, Alberto had no right to even those pennies as he was not a rightful heir and was to only receive a weekly stipend or allowance until Jean inherited the estate. Alberto hired those lawyers, initiated the litigation, squandered what Ullman made of Valentino's estate and it was Alberto who hired more lawyers throughout the ensuing thirty years to try and force Ullman to pay him money he received and spent.

Alberto's refusal to establish a fairness lien and settle the problem when Jean turned twenty-five, crushed Ullman financially for the rest of his life. This is all well-documented. It is especially offensive to me to read Alberto's interviews where he casts Ullman as the villain, erroneously stating as fact that Ullman was found guilty by the court while never stating all of that was overturned on appeal. The brazen lie about the reason why Ullman owed the Valentino estate is still perpetuated. And Ullman is defamed with ridiculous, cruel and yet all too familiar innuendo.

Acting in good faith, Ullman accommodated Alberto's requests for advances, before the appearance of Paragraph Fourth... only to have Alberto demand Ullman personally pay him those advances a second time. And the total of those advances in 1934 was just over $70,000 for Alberto alone and with interest the amount of all of the advances accrued by the 1950's to $160,000. By today's exchange rate this would be over two million dollars with the advances made to the “penniless” Alberto valued today at just over $900,000.

I know why those probate records turned up missing and why the Valentino family had such a burning interest in having them in their possession. Because Alberto did not tell the truth, wrongfully portrayed himself as having received nothing from his brother's executor and cast the executor as a villain.

For years, “they” the team and the Valentino family's silence, nurtures the lie that I forged the court records I sourced in Affairs Valentino. What a genius I would have to be to do something like that. But they know these records and this story exists in the documentation and have admitted having had access to them. Instead of issuing some amends for the injustice done to Ullman, they continue to call me a mad woman and disgrace Affairs Valentino by repeating the same old tired lies which Alberto initiated in his attempt to generate sympathy for himself and perpetuate a vendetta against S. George Ullman.

I became the one to find this story buried in those court records. I guess they all felt smug and safe knowing no one could access the records and thereby Alberto's bullshit could stand. But when I did tell the story, share the documents and reveal the facts of the sad tale... their response was to kill the messenger with lies and defamation. I am sure it was not a great moment for them to realize that in their heist of the truth, they neglected to steal the appeals court copies of those records. I guess there is no such thing as the perfect crime.

In 2011, (I believe it was December) Michael Morris told me, via e-mail, that Jeanine Villalobos asked him for Bunny Ullman's home address. As I promised both Bunny and Bob I would never divulge their locations, I told Michael I could not give this to him. If I recall properly, he told me Villalobos had a private investigator try to locate Bunny and gave me the name of a city where she believed Bunny lived. I told him that was not where she lived and he then told me Villalobos wanted Bunny's home address so she could apologize to her for all that happened to her father. I told Michael Morris that if the family was sincere in this, they had many other venues with which to issue an apology publicly. 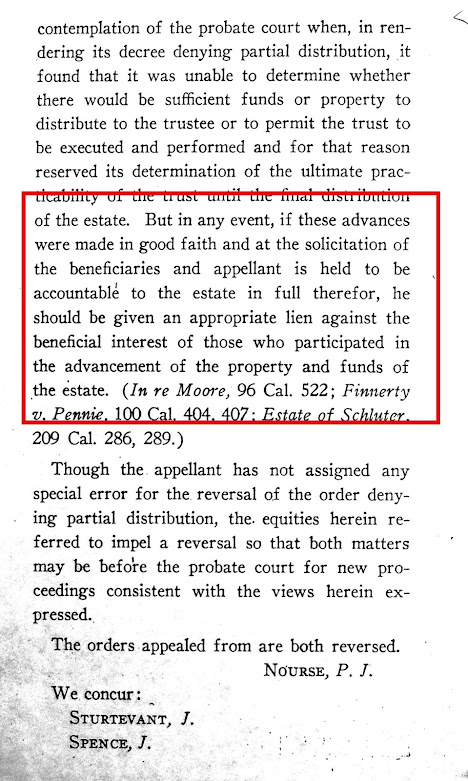