"Insults: The Weapon of Cowards!

For years now, we have suffered the vile attacks of Tracy Ryan Terhune and David Bret.

They initially disguised their attacks as criticisms of Evelyn's book Affairs Valentino and did so, and continue to do, from a blog that happens to be titled Affairs Valentino. Since criticizing her book was not enough, they began to criticize all of our publications, a legitimate action if supported by intellectual honesty but their criticism of Affairs Valentino evolved into a bloody autopsy of our works.

Having found nothing truly to complain about, they began just accusing me of grammatical ignorance pointing out simple printing errors and a few typos.

While Evelyn and I defend ourselves from these two ghetto bullies, they have added even heavier insinuations to their generic insults both about our marital relationship and about my manly qualities.

They try to ridicule me because Evelyn and I decided to keep the pen name with which she has been known for a long time, Zumaya. There are no alpha, beta or gamma husbands, there is only one husband and that would be me!

In addition, a photograph of myself has been published while I was wearing in Morocco robe, a very common Maghrebi male suit and for this reason to Tracy Terhune I have become the husband “who wears a dress”.

I am amazed that two defenders of homosexuality, Tracy Terhune and David Bret, use references to homosexuality to offend, insult and ridicule. Depending on what they want to say, their use of the term “homosexual” can be praise or an insult?

I wonder: do they really have nothing else better to do? It would be useful, given that they pass themselves off as Valentino scholars and “experts” who are most often wrong about everything, that they dedicate themselves with the utmost humility, a skill that they lack, to better investigate Rudolph Valentino.

I also recommend to Bret, the new Dogberry and Trinculo jester, not to bother to cite Shakespeare and his great work Othello so haphazardly. I'm sorry for Bret's lack of knowledge about Shakespeare, but the term, “cuckhold” (which he and Terhune now use to describe me) this word which amuses Bret as he cites it to Iago's line, has nothing to do with the context in which he tried to use it as a weapon against me. This is because I am more than sure of the fidelity of my beloved wife.

Bret should study and above all stop telling his indefensible stories. In his case, the Emperor has no clothes but continues to brag about his beautiful clothing.

As Tracy Terhune plays with his Rudolph Valentino toys and goes unpunished for what he does to us, I advise him to go ahead and, “Play, Tracy play,” but leave the adults alone and non rompere le scatole.

What began as their phony excuse of an Affairs Valentino Critique on their hate blog targeting us, has evolved now into their weapon of high level deceitful cyber-bullying and something I think they can not be proud of. I will say this, our books are so powerful that they are still attacking them and us after more than ten years." 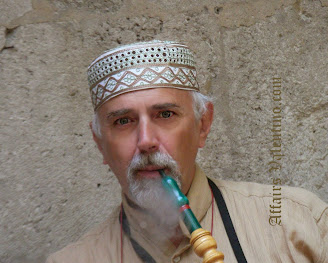