An Army of One

George Ullman was the hero of Valentino's legacy. There were many heroes in my opinion, but he brought something exceptional to the narrative of Valentino's life after the summer of 1923; cash value. Previous to this time, Valentino's movies were exceptional opportunities for Valentino to build an audience and in this gain power.

After the summer of 1923 and Ullman's arrival, the movies became powerful opportunities for Valentino to be very wealthy and for Ullman to generate that wealth.

Ullman seized this power and created a bidding war for Valentino's contracts, i.e. the numbers he wrested from Joe Schenck at United Artists were remarkable. If Valentino had lived he would have been a millionaire within months.

Without the strong arm of the noble and highly-qualified S. George Ullman, things would have been no doubt much different.

I have referred to Ullman as the army of one; an effective army. He was praised by the California Appeals Court judge for his service to Rudolph Valentino and exonerated on all of the expensive and totally meritless charges brought against him by Alberto and Jean Valentino.

S. George Ullman, the man who was caught in a great twist of Valentino's fate and who would pay dearly for that entrapment his entire life.

Accept no cheap imitation versions of his story...perpetuated by those hoaxers.

Anyone appreciating Rudolph Valentino surely must give credit where credit is due and this would be to S. George Ullman; hero of the lasting legacy.

I thank him for working so hard in the months after Valentino's death to promote those last two movies.

I thank him for sending those thousands of letters which resulted in a world of Valentino Memorial Guilds and their enthusiastic members.

I thank him for negotiating those great United Artists' contracts which resulted in The Eagle and The Son of the Sheik.

I thank him for enduring three decades and counting of harassment by the Valentino family which according to what his children told me, he endured with spirit and class. 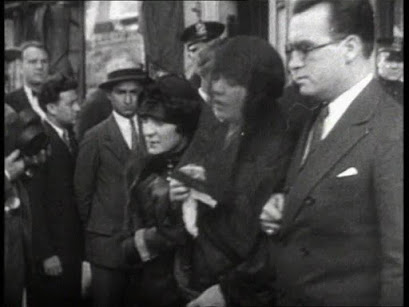 S. George Ullman with his wife Bee and Pola Negri 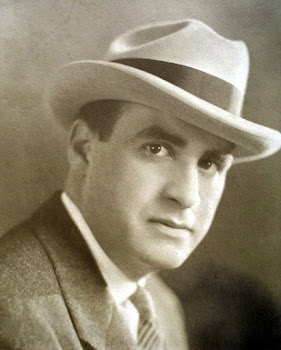 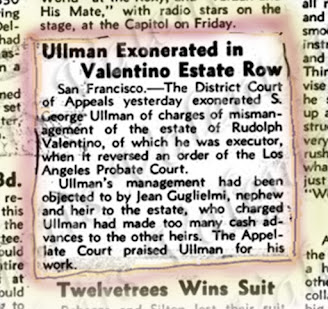