From 1921-1923, Robert Florey worked as a press agent and secretary for Rudolph Valentino. When Valentino and his new bride Natacha Rambova traveled to Europe in 1923, Florey acted as a critical advance man for the tour. It was his job to organize press in advance of the Valentino's arrival in a city by dispensing photographic materials and press releases and making hotel reservations.

It was during this trip in 1923, Valentino and Rambova visited France. During this visit, Valentino faced a publicity crisis with his French public which was caused by Robert Florey. Robert Florey reported publicly how Valentino told him he found French women too fat, and followed this disparaging remark with other denigrating statements about France allegedly made by Valentino to Florey. The French responded accordingly and it was an effort on Valentino's behalf to quell the furor. French Valentino biographer, Jeanne DeRecqueville wrote about this episode and included a letter penned to the French press at the time in support of Valentino by René Clair.

The result of this crisis was that Florey was fired; not only as advance man but as Valentino's friend. This seems understandable as the person who was hired to expedite positive press for Valentino accomplished the exact opposite.

My first awareness of Valentino firing Florey came about in one of my interviews with Valentino memorabilia collector William Self. Self, as a television producer, gave Florey work as a director in the 1950's and 1960's and knew him well.

Florey admits to only having a working relationship with Valentino until 1923, but does not mention why nor does he ever address publicly his being fired over his divulging those denigrating remarks about Valentino.

In 1948, Florey published a book titled, Hollywood, Yesterday and Today in France. In this book he included a chapter titled, “The Magic Lantern” about his time spent as Valentino's press agent. I have addressed this piece on Valentino by Florey in a podcast and found it to include insults about Valentino while portraying him in a less than favorable light. It is not surprising Florey would assume this tone of revelation as he was someone who was fired by Valentino and no doubt harbored resentment.

In “The Magic Lantern”, Florey repeats the very information which had him fired in 1923. In my opinion there is no admirable way to account for his doing this. If he was such a great friend as he claims, he would not have betrayed Valentino in the first place by making comments which might have been shared with him in private. No press agent would allow such comments to be made public knowing the result they would generate.

I think the answer to the question as to why Florey would subsequently repeat them again and again is obvious; dead men don't tell tales and won't protest. In my opinion this was his means of revenge threaded into a general narrative about life in the presence of Valentino.

Which brings us to the point of today's post. In 1956, Florey reissued his “Magic Lantern” as an eight installment series on Valentino titled, “Inoubliable, Inoublié, RUDOLPH VALENTINO Survit à Sa Légende“. (Unforgettable, Unforgotten, Rudolph Valentino Survives his Legend) which he published in French in the fan magazine, Cinémonde. This was in commemoration of the thirty year anniversary of Valentino's death.

We learned of this series from David Bret on a post he made as a comment on May 23rd on the blog run by Tracy Terhune under my book's title. It was then Bret accused us of being homophobic because we did not reference Florey's 1956 series, “Inoubliable, Inoublié”.

Bret also claimed he did not reference “The Magic Lantern” as his source for his claims Valentino was gay, but it was “Inoubliable, Inoublié” instead. Now after having read this entire series, I wonder if David Bret can read French or if he has ever read “The Magic Lantern” or “Inoubliable, Inoublié” for that matter. If he did...he would realize quickly that it is the same content and anecdotes and that there is nothing new presented and nothing sexual in this publication at all.

In Bret's bibliography of his Valentino bio, he says “Inoubliable, Inoublié” was “unpublished”. I correct that and say it was published.. not once but twice.

Renato located these eight installments and has translated the entire series into Italian and English to verify as false Bret's allegation that this was his true source of gay Valentino. “Inoubliable, Inoublié” is nothing more than “The Magic Lantern” narrative with some other information cobbled together presenting an even more disrespectful portrait of Valentino.

Bret's stating we are homophobic in not referencing this series by Florey is a ridiculously false statement with no basis in fact other than the fact that Bret has called us homophobic for a decade now as he does with all of his critics. I state this is appalling behavior for someone claiming to be a champion of gay rights. No one should ever wield, and frivolously so, the subject of homophobia as a personal weapon of choice. It should not be used to incite hatred of someone he perceives as being an enemy. It is a dangerous, if not criminal, thing to do.

In 2009, Bret claimed his source for his gay anecdotes about Valentino was, “The Unpublished Diary of Rudolph Valentino”. When pressed, by me, for the location of this diary, he gave me the name of a Italian publisher. This publication he referred to was not unpublished and was in fact the Italian translation of Valentino's “My Private Diary”. Bret then referred to Florey and letters Florey published which he claimed proved they were lovers. Those letters are included in both the 1948 and 1956 Florey narratives and contain nothing but instructional information about the work at hand. And yes before 1923 it was a cordial exchange.

For me this is the end of the line for Bret's poorly executed attempts at pointing to his non-existent sources to support his claims Valentino was gay. If this was his true source, he had zero to reference; absolutely zero. For some ten years and counting Bret has pointed in many directions to divert anyone questioning his sources; and “Inoubliable, Inoublié” is another false claim and another diversion.

On May 23rd, Bret claimed this was in fact his true source and now we can say definitively this is not the source which he claims it to be.

We will be publishing “Inoubliable, Inoublié” after negotiating the copyright permission with the Bibliothèque Nationale Française. 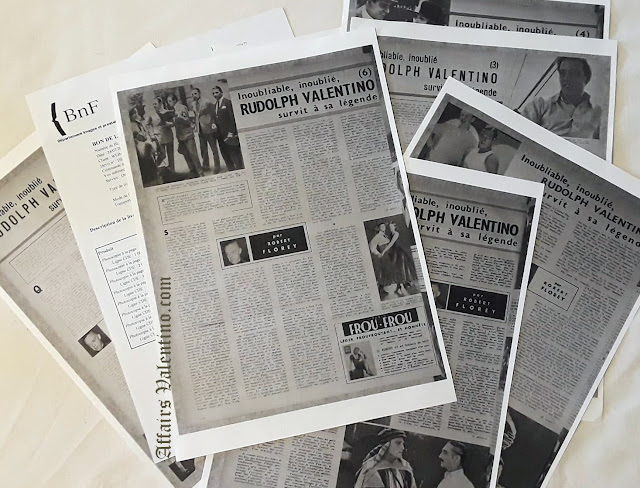