With a bit more to add in regards to Rudolph Valentino and “The Masked Model” tour in the spring of 1917, I share the following:

In my previous post, “The Masked Model”, I referred to Valentino's alleged firing and departure from the show, which was reported in the biography of Max Steiner, “The Masked Model's” musical director. Steiner claims at some point as the show crossed the country, Valentino (“Mons. Rudolph” as he was billed then) had a dispute with the show's director and was fired.

It is also alleged in most of Rudolph Valentino's biographies, that the show went bankrupt and folded before it ever reached San Francisco. I dispute all of these claims.

Perhaps Max Steiner had a memory to draw upon and perhaps there was a dispute between Valentino and the show's director. But according to the show's announcements and the general press still in existence today, I do not believe Valentino was fired from the show nor did he leave his position with the show in disgrace. Not at all.

The show did not go broke but toured all the way to San Francisco and beyond as it headed south to Los Angeles. “Mons. Rudolph” and his dancing partner, Edith Mason appear in the Reno show the end of May prior to the San Francisco show. I contend Reno is not so far from San Francisco!

The timing of Rudolph's leaving “The Masked Model” has recently been the subject of some investigation by a researcher friend of mine as I mentioned in my previous post. Thanks to more of their discoveries, we know Valentino did not perform in the San Francisco show but he and Edith Mason appear to have rejoined the show in Sacramento and Fresno from June 12-June 19th.

The curious timing of these appearances meant Valentino was actually performing in two shows as he is also listed in the cast of “Nobody Home” on June 11th. Granted “Nobody Home” played in Oakland and “The Masked Model” in Sacramento which is located exactly 68 miles away. It could have been possible.

But this disputes the claim by Steiner that Valentino was fired and left in disgrace. In fact we find the opposite as he is advertised for his performance in, “Nobody Home” by citing his “starring” role in “The Masked Model”. Although Joseph Lertaro (see my previous post) was clearly the star of “The Masked Model”, Valentino was billed as being the star in some of the promotional advertisements for “Nobody Home”. “Nobody Home” was billed as an, “enormous success” and he appears in the cast until early October.

After their appearance in Sacramento and in Fresno, Valentino and Edith Mason disappear from “The Masked Model” cast and he apparently works only in “Nobody Home”. We know he joined the cast of “The Passing Show” subsequently and this was how he came to Los Angeles. But I believe there was one other factor contributing to the end of Valentino's reputable and prestigious vaudeville stage career about this time.

We learn from the personal account of Douglas Gerrard as revealed in The True Rudolph Valentino by Baltasar Cue, that Valentino arrived in Los Angeles in late fall of 1917 and was suffering from a dubious reputation for having been involved with the DeSaulles divorce and John DeSaulles murder. We also read how Thomas Meighan lectured Valentino about his tarnished reputation and Alla Nazimova openly called him a “pimp”. I believe this came about because his reputation worsened after August 3rd.

On August 3, 1917, as Valentino was starring in the, “enormously successful”, “Nobody Home”, he would have learned Blanca DeSaulles murdered her husband. I contend that previous to August 3rd, he enjoyed success as a revue dancer as his reputation was not so sullied. His being involved in a divorce in New York was scarcely material to ruin a reputation.... but murder sure was.

He was not fired in disgrace from “The Masked Model” but took on another role in another show; a show billing him as a feature act. He was already well known on the vaudeville musical variety circuit and previous to August 3rd, there is nothing but more work for him and acknowledgment. He was not unemployed but over-employed.

But on August 3rd, the DeSaulles murder made national headlines and this changed things I believe and made life for Mons. Rudolph much, much more treacherous. Monsieur Rudolph's professional reputation took a heavy hit when Blanca DeSaulles fired that gun...and perhaps it was more for that reason that he leaves the cast of “Nobody Home” to head south from San Francisco.

Edith Mason vanishes after the Sacramento and Fresno shows and no trace of her later life and career can be found. There is an opera star named Edith Mason who dominates the search but this is not the seventeen-year old who danced her way across the country with Rudolph Valentino.

I am curious about Max Steiner's memory of Valentino being fired somewhere on the tour and having to be fed and housed by cast members. Perhaps there was a falling out along the way, but Mons. Rudolph and Edith Mason appear in every show all the way to San Francisco.

“The Masked Model” did not fail financially and I think Rudolph found more employment and left the show in a smart career move. No doubt he was ready to leave the competition with Joseph Lertaro behind for a more starring role in “Nobody Home” and perhaps for the opportunity to dance with Miss Jane Urban!

Jane Urban was hugely popular at the time, a powerful force in the Bay Area's theater scene and the director of the Orpheum Theater. For Valentino to accept a position as her dancing partner then was a savvy career move and he would have benefited professionally. Although he appeared on stage with the impressive Ms. Urban, his rise to even more fame did not occur.

I think we can also add to the reasons why he left San Francisco when he did and why.. the reality that his reputation was savaged when Blanca DeSaulles shot and killed her husband. Did he become a pariah? Did Jane Urban want nothing to do with him?

It makes one wonder where he was when he heard the news and how quickly the fallout affected him. He would turn to friends, Norman Kerry, Frank Mennillo and head out of town to try his hand in a new profession; the movies. I guess the young vaudeville variety dancer, seeking to reinvent himself.. had some very heavy baggage to carry at the time.

I say August 3rd was the game changer. 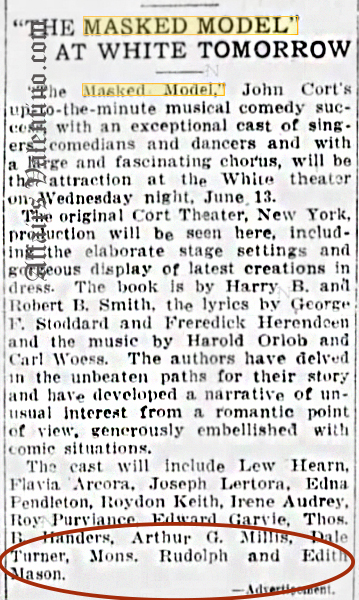 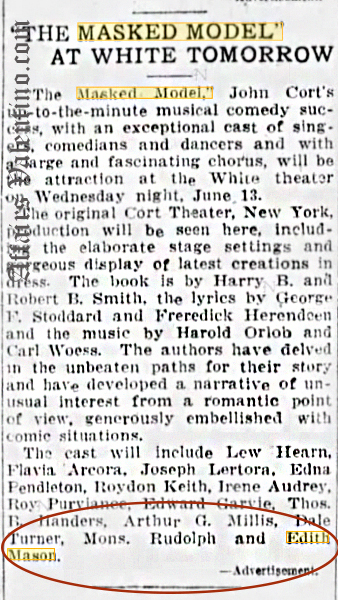 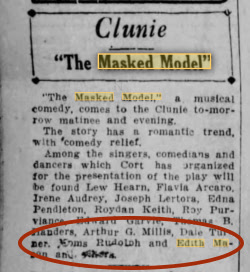 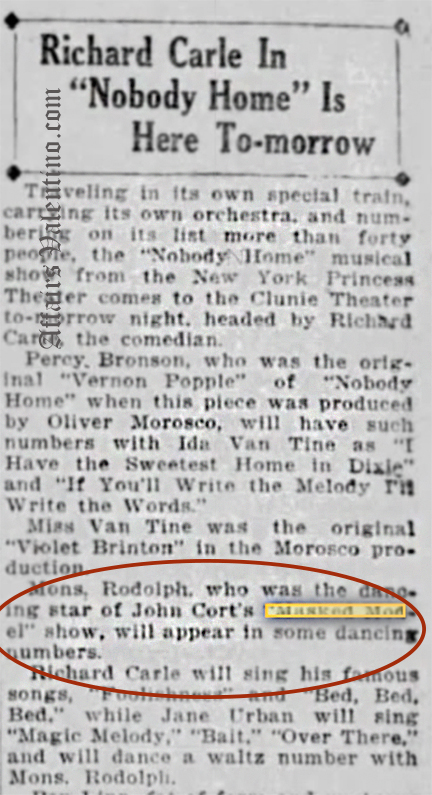 Valentino is not mentioned as star in The Masked Model 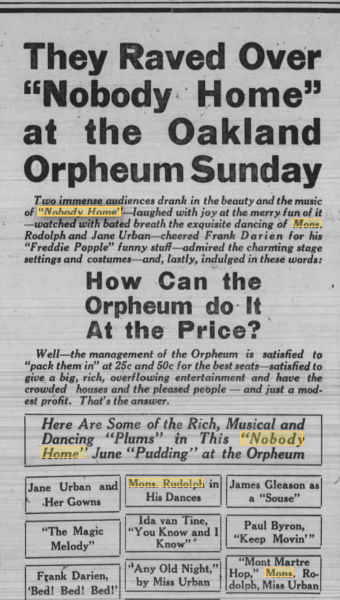 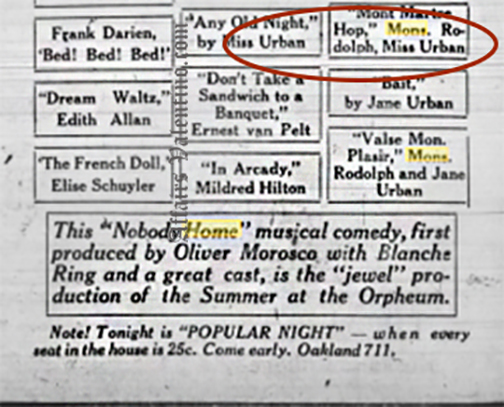 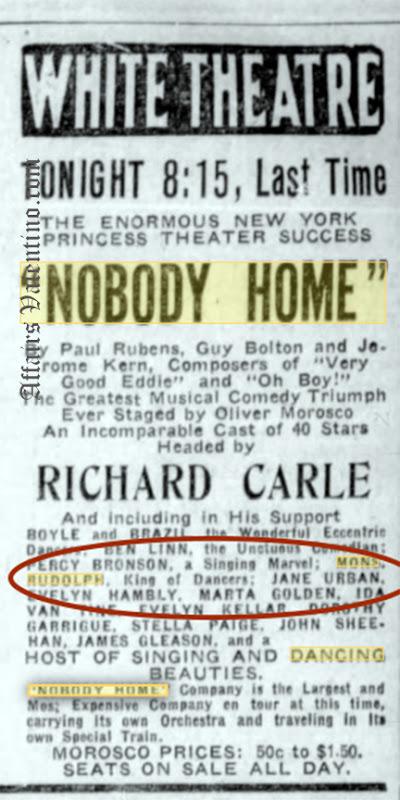 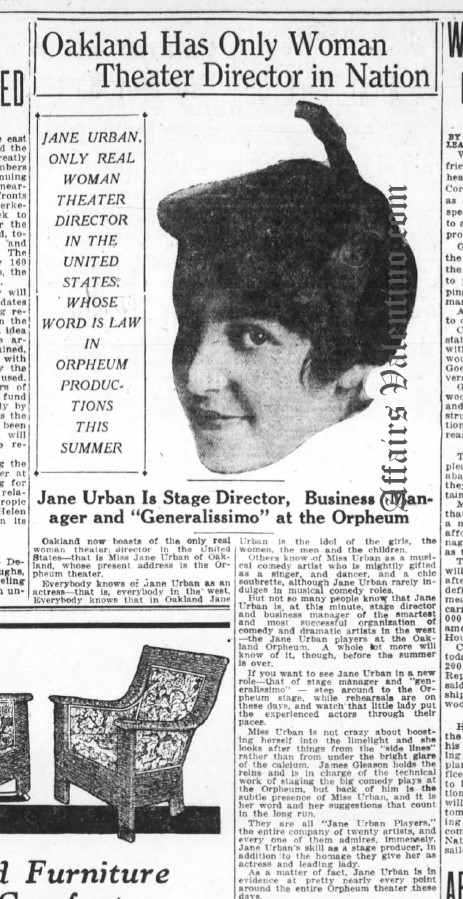