On the Subject of that Surname

It has been brought to my attention that “Team Terhune Captain”, Tracy Terhune responded to a question on his Facebook group which I address here. As Renato and I are not only banned from that group, but blocked... a good Samaritan sent me the exchange between Ms. Mirella Guglielmi and Tracy Terhune. Terhune informs her that Alberto changed his name legally “in honor of his brother's untimely death.”

I went back and looked at the documents I included in Affairs Valentino and found the following for Alberto: 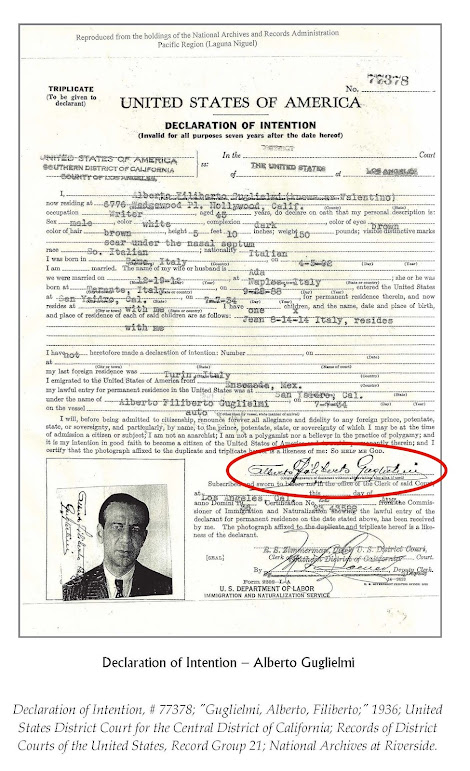 This was in 1936, so then he was still legally Guglielmi and  as an aside...(known as Valentino) and note that he signed his legal name as “Guglielmi”. If he ever did change it later on legally, I have never seen proof of that. Terhune neglected to tell Ms. Guglielmi that Rudolph himself never legally changed his name to Valentino. He was Guglielmi until his death.

And in ”honor of his brother's untimely death” is a stretch when it was still not changed ten years later. I also recall reading an article where reporters questioned Alberto why his luggage had the Valentino initials on it when he arrived after Rudolph's death. I wonder if other star's who used a stage surname such as Cary Grant had their siblings changing their names. I think history has revealed why Alberto adopted Valentino so fast.

Jean also used Guglielmi at least until the 40's. Terhune should know that all of the probate records and subsequent litigation refer to Valentino as Rudolph Guglielmi, a.k.a. Valentino. And using your stage name initials on stationary and luggage, etc. is not proof of a legal name change.