He Was Not Without

Michael Morris was always convinced that June Mathis was in love with Valentino. It was one of his favorite topics to ponder. I was never so convinced but I do think the positioning of Mathis as a major influence, a  'mother figure" to Valentino is based in misogyny.

Mathis is historically cast as the "matronly type" because she was not tall, thin or glamorous. For this she has typically been the woman in Valentino's life relegated to the status of a,  "motherly figure". I allege that is solely based on her physical appearance and had nothing whatsoever to do with her mothering Valentino.

The notion Valentino was even looking for a "mother figure" is problematic for me because he had a mother throughout all of his childhood. He had a mother until he was into his twenties, a mother he loved. He was not without.

He should have been, by circumstance looking for a father figure. Who would that be in the cast of his life's characters?

Was Michael Morris right? Did June Mathis fall in love with Valentino and at some point realize she did not stand a chance? Did she hope to be more than a friend and patron? If she looked like a gorgeous movie star, would she still be referred to as his "matronly, mother figure"?

Of course not. She was just objectified.

Rudolph with June and Rex Ingram: 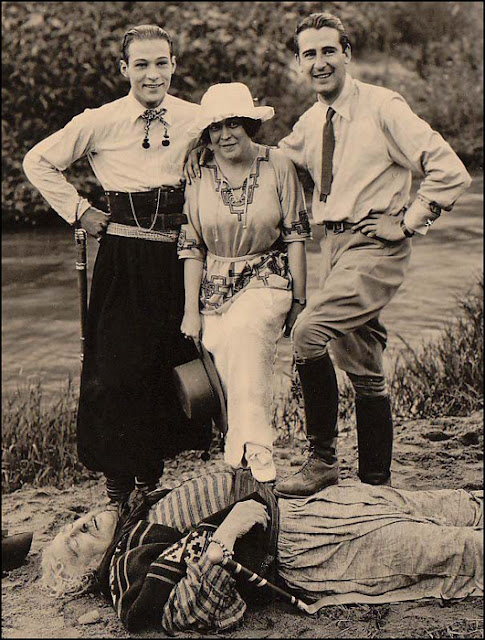