This little mention (see below) is worth sharing I think; a revelation that Valentino said he was a Fascist and supporter of Mussolini. Renato pointed out that Valentino would have said this because in 1925 for an Italian to oppose Mussolini, well this would have been a sure professional suicide.

It is obviously something Valentino changed his position on and Mussolini's treatment of him is well known. But isn't it more interesting Valentino mentioned he, “wishes he could lead a more stirring life on the real stage of war or politics.”

Imagine that. Rudy as a battlefield general or a barnstorming candidate for governor. There is something awful about life that in November of 1925 he made this statement so full of great ambition yet he would face death within nine short months.

Since I began writing on Rudolph Valentino, I have always dreaded this time of year... the “August” event = death. It is so awfully grim to think of him dying with that "stirring" life ahead of him. I can not dive into that particular and morbid memory of Valentino with enthusiasm. It just feeds the nightmare, contributing to that tiresome stigma attached to Valentino...the one which he is so well known for... his death. 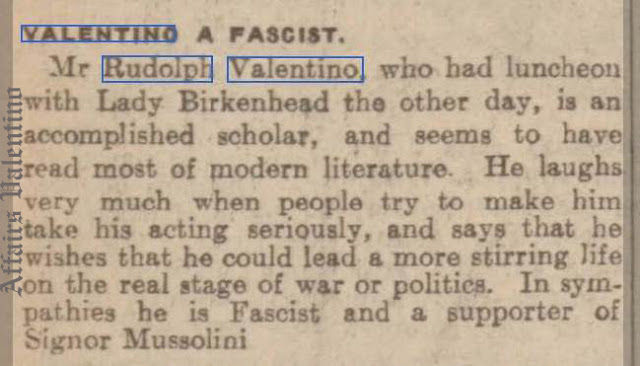