I imagine most people have read the novel, Fahrenheit 451 by Ray Bradbury. The book was published in 1953, with a plot revolving around book burning in a future world where reading is against the law. The title reflects the temperature at which paper will combust without being ignited.

The characters in the book who do the book burning are called, “Firemen”. My point in referring to this novel is that I find a chilling similarity between Bradbury's dystopian scenario and the two Valentino Facebook groups, We Never Forget and Mad About the Boy. I accuse the administrators Simon Constable, Eleanor Gribbin, Tracy Terhune and Donna Hill, et al, of being “Firemen”... with all of our books being burned...outlawed if you will, with even our names banned from any mention.

There is little difference in my opinion between those two groups and the censorship and oppression in Bradbury's grim, yet actually realistic vision of the future. How is it possible these people run Facebook groups dedicated to Valentino while they censor what their members see, read and discuss and worse still they lie about us and our books with impunity.

The “Firemen” of We Never Forget and Mad About the Boy heave our books and our truth in their fires and suppress any distinctive ideas or honest exchanges. These “Firemen”, in my opinion, represent the worst element of social media as they enforce the opposite of free exchange, generate fraudulent conversations with themselves under their various aliases and conspire to create an environment similar in my opinion to Fahrenheit 451; steeped in their deceit and willful effort to keep their members less informed.

Conversely, I applaud the Rudolph Valentino Facebook groups which do encourage open discussions such as, Rudolph Valentino – Forever in Our Hearts... and hope people will support this energetic and intelligently administrated forum. 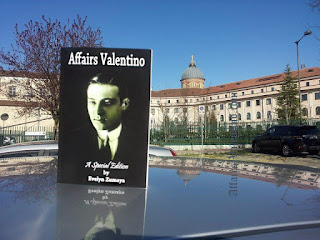