Bullies will always say you are bullying them if you defend yourself.... at all.

Bullies will pounce upon any fresh tidbit of personal information about their victim... an outfit they saw them wearing in a photo online, a meal they ate... and with sheer glee the bullies will roll that on over into some deep mocking.

Bullies will weep on piteously for years, like giant infant babies, wailing over the meekest sign of retaliation from their victim.

I have learned a lot about such things as bullying, specifically gas-lighting techniques, psychological warfare, etc. because I wrote Affairs Valentino... a book in which I dared to say that Valentino was not gay, that his brother Alberto was not some saint, that the handyman was also not perfect, and that George Ullman became the ultimate red herring, etc.

I could never have imagined that because I reported on that true story, I would become an expert on being bullied. Oh I can hear them scoffing reading that sentence and rushing to confab with that clack, clacketing away of their keyboards determined to cry one more time how I am really the bully … for not taking their abuse silently! They fool no one with that.

Are they winning in their perceived, decades long war to “ruin” me? Not at all and I spit on their idiotic war. They might want to know they lost this one long, long ago.

I have a great and admirable life, a beautiful inside and out, loving husband, four fabulously entertaining fur babies, a supportive family... and extremely exciting new projects which seem to fall out of the air. How could I not feel blessed?

I am sorry for those bullies apparent inability to stop being horrible towards us. Their unhappiness seems unalterable. It must be very strange to live your life being multiple people. Keeping up the outer facade of niceness while suffering so feverishly behind that facade to ruin people and in such an evil way. A treacherous dichotomy to uphold I would think.

When they began to throw their stones at me, online bullying was barely a thing. It sure is now and it is heartening that people recognize those signature bullying techniques: the deeply personal insults, the cruel mocking and attempts to be funny with a constant mention of their victim's death...these are hallmarks of bullying behavior. And boy are those bullying us...seriously invested in that behavior. They are scarcely capable of doing anything less than to be their most wicked.

For today, Renato is cooking and it smells wonderful in here, the puppers are sleeping after keeping us awake half the night and I am feeling grateful. 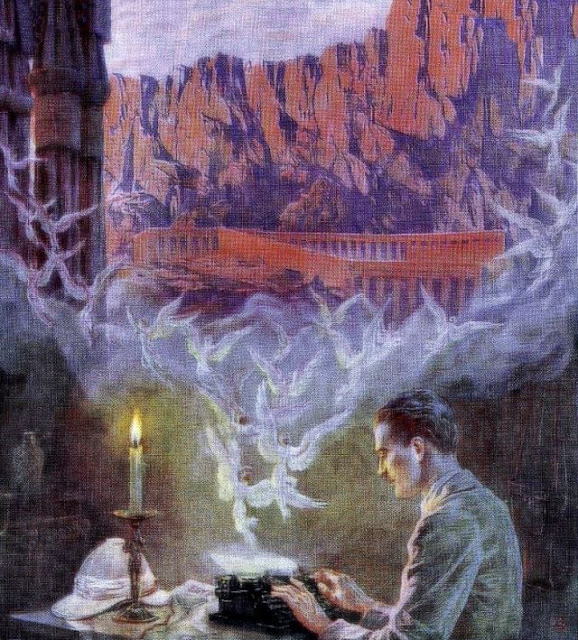 I am not sure who to give credit to for this great art. It was an ad for the typewriter which I just love.