Some Justice for George Ullman and for Affairs Valentino!

I could not be happier with the news I share today. Back in 2003, I managed to find the Appeals case filed by George Ullman...in a law library in San Francisco. When I reported on this entire story in detail in Affairs Valentino, Tracy Terhune ramped up his, “Campaign to Ruin Evelyn” and allowed the claim to run rampant how I wrote “trash fiction”, his followers chiming in how I forged those court records I claimed I discovered. Cindy Martin would tell Renato how she believed I forged those court records and wondered why Terhune never told her this was not true. Eventually Terhune admitted the records existed but not before years of damaging attacks flooded my online search and created a popular belief I was somehow, incredibly capable of forging California Appeals Court records.

I published the records in an Affairs Valentino Companion Guide but the “trash fiction” tag from Terhune continued. I was portrayed as a liar, a fraud, my work belonged in the trash bin and accused of just about everything else.

Throughout that time I hoped no one would manage to steal the original records of George Ullman's Appeals Case and the Appeals ruling because this was the only proof existing that I was telling the gospel truth.

Today I am very pleased to announce that the Appeals ruling is now online through the link @ https://cite.case.law/cal-app/138/80/ and is safe from any pilfering. I am ecstatic and feel justice for Affairs Valentino has been handed down with this one document being so authoritatively available online. I know it might be confusing to read but for me it is pure vindication.

I am very happy to finally share this link! Victory!! 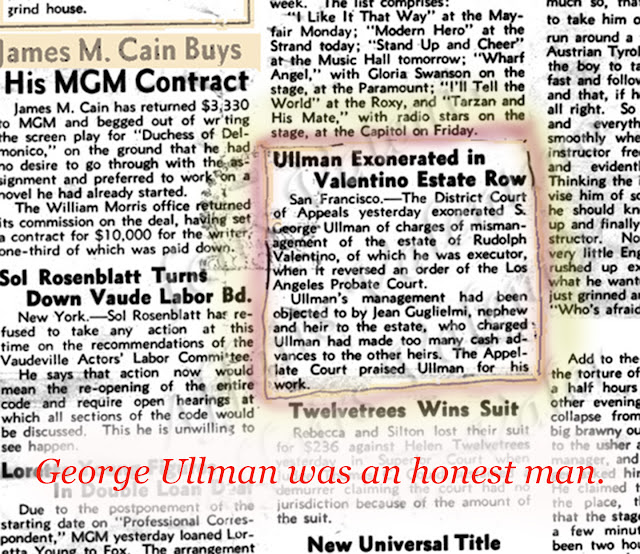