Alberto Valentino would later admit he never had any intention to replace his brother Rudolph. I guess back in the day before online archives this was an easier thing to do; to erase your past. I have no doubt Alberto was pressured into replacing Rudolph because there was money to be made. But if you think about it, Alberto even entertaining the idea diminishes the profession of acting. Is acting something anyone can just do without talent, without a knowledge of the profession?

George Ullman wrote how Alberto's first comments on his arrival in New York after Rudolph's death shocked him. Alberto asked how big was the estate and then told George not to worry because he would take Rudolph's place.

If someone suggested I replace my sibling in their profession I would think they were crazy. If I announced upon their death that I was going to take their place in their chosen profession, I think everyone would think I was crazy.

Alberto soon discovered it was not all that easy a thing to do to try and become your brother. This take on the new face as published on October 19, 1927. 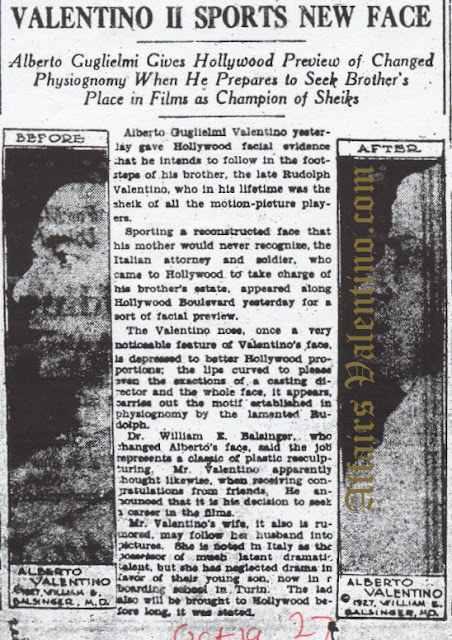