Renato Floris is a worldly man who is by nature a linguist.... ever facsinated by historical intrigue and words. Renato first came to the subject of Valentino when he was hired as an advance man for the Italian television (RAI) production of a Valentino documentary in the 1990's. He spoke English well and knew Los Angeles intimately as he spent time there in 1984 working on the opening ceremony of the Olympics with Frank Gehry.

While he was in Los Angeles he met Michael Morris and while filming one element of the documentary he would film Tracy Terhune in the gathering. Go figure. Little did Renato know this then young man would be tearing his efforts to shreds some years later.

Renato was invited to the opening reception of the Convegno Valentino in 2009 and it was there we met. Our mutual friend Michael Morris was determined we meet and we sure did. Hello.

Renato brings an element to the Valentino history which is unique. He reads French and Spanish and in this he is accessing archives which have yet to be discovered. More to come on that! Can I just say he id-ed the “prima donna”?

It was an unlikely interest in Valentino for Renato; one he found because of a contract job back in the mid-1990's. And one which would have more importance after he met me.... obviously.

Renato's insight into Valentino history is one of an Italian man who knows the terrain and the culture intimately. I feel this is long overdue and his work in the French and Italian archives is bearing fruit... lovely, ripe and delicious fruit. More on that soon too.

Michael Morris gloated over his putting Renato and I together. He was so satisfied with his match- making efforts. He was, and always will be our angel and there is not a day I do not thank him for that.

True love has its ways I think. And the greatest possible reward of this Valentino story for us... is us.

Here he is before the Great Ravine of Castellaneta in 2014. 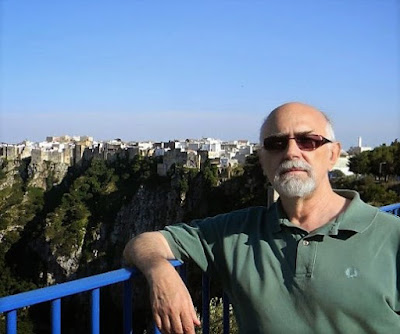