Adding to the Outrageous

Expanding on the past couple of posts about the false narrative issued by Alberto Valentino over the years as to his claiming he received only “pennies”, “worthless real estate”, “a few sentimental items”, etc. from Rudolph's estate, I add the following.

In 1928, Alberto granted an interview to Ms. Elsie Madden who wrote an article titled, “Are They Making Valentino a Saint?” which was published in Motion Picture Magazine that February. After telling Elsie Madden that he intended to go into movies only to keep the name Valentino alive, Alberto explains it this way,

“Someday my brother's pictures will no longer be shown. Then, if they see me, they will say, 'That one is Rudy's brother' and they will not so soon forget the name Valentino”.

Ms. Madden then adds the outrageous...writing how Alberto says he has, “not received a penny yet from Valentino's estate”.

This was 1928 and two years had passed during which time Alberto lived in luxury and entirely on advances from his brother's estate. I posted some of the totals of the money and funding he received cited from the court records in my previous post titled, “On The Subject of Fabrication”. Suffice to say that by today's exchange rate the advances Alberto received ran into the hundreds of thousands of dollars. (his cash advances of @$39,000. today x 13 would be the equivalent of $507,000).

In February 1935, Alberto poses with his wife Ada and Jean for press telling them he is “broke” and in “Dire Straits”. He does not explain the actual situation as to how the money vanished. 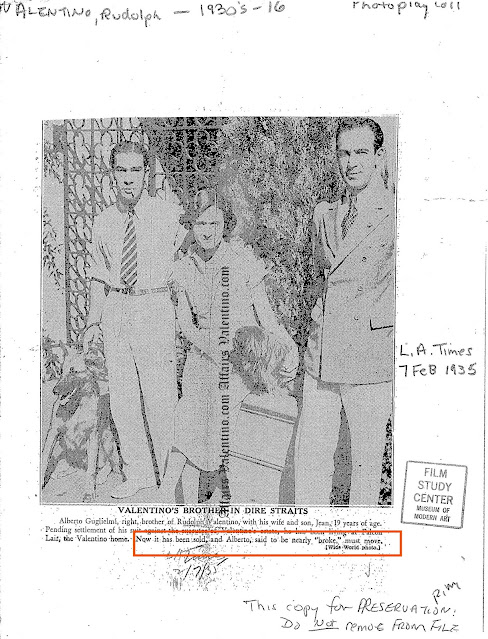 And later in that same year, another article titled, ”Nephew of Valentino, Living in Faded Glory, Wants to Be Actor”, appears in which Alberto shares more of his false narrative, “Alberto, once business manager and expectant heir to his brother's fortune, was unable to get any of the money and only small bits of almost worthless real estate.” 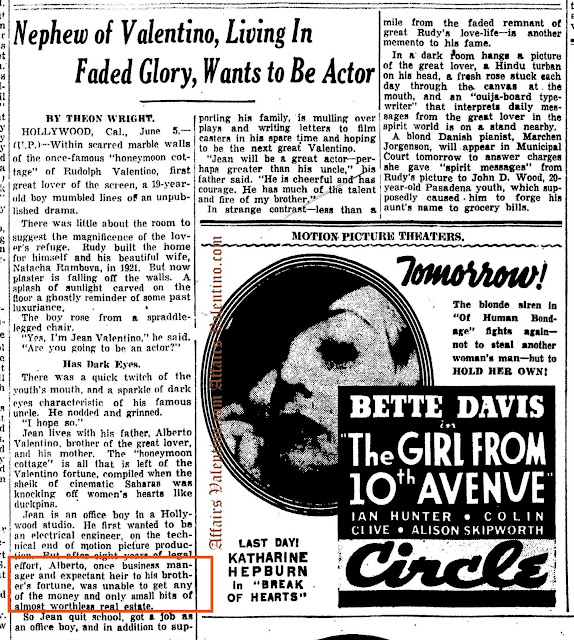 I find this incredible that no clarification was brought forth about this until I found those copies of the stolen probate court records. This story was finally told within the court records and considering how mightily Alberto spun the tale in his favor, I am not surprised those original court records have been missing for decades.

I share one more tidbit which I did cover in Affairs Valentino in the “What Ever Happened” section under “Pola Negri”. I think the article (below) explains the situation but the last line could well be re-written for Ullman. Instead of saying, “The actress having then loaned the money, ended up owing it!”, we could make this, “The executor having advanced the money, ended up owing it!” 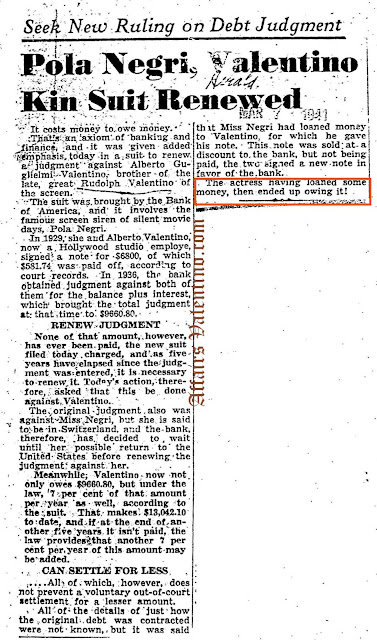 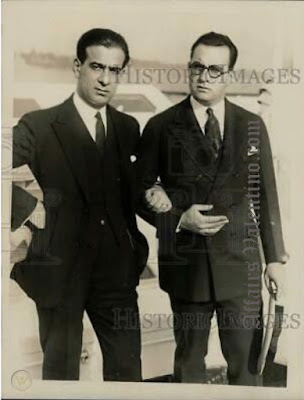 Alberto Valentino with George Ullman in New York in September 1926.
at October 12, 2020