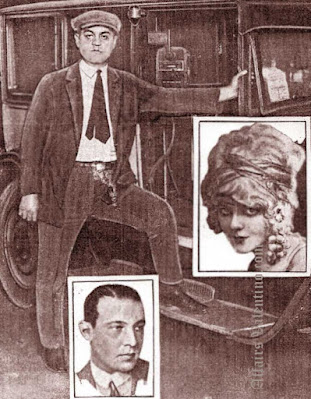 Mike LiCalzi's fifteen minutes of fame. Mike LiCalzi was a New York City cab driver who probably had no idea he would be the subject of a blog post in the year 2020...but he is. What a valuable contribution Mike LiCalzi made to the story of Valentino's last night on the town, I guess you could call it.

I found the cabbie's story in the archive of Irving Schulman, Valentino biographer. Schulman's archive in 2004, was housed in the Special Collections Department of the University of Southern California. I was surprised on my arrival to see his entire Valentino archive in the Rare Book room, consisting of only a couple of boxes. Other than his notes and drafts of the book, those boxes contained copies of many newspaper articles and a sizable scrapbook.

The scrapbook was meticulously kept and contained Valentino articles which primarily referred to his death and funerals. It was in this scrapbook I found the article and this image of cabbie LiCalzi.

The elevator operator would also deliver his statement attesting to the timing. He recalls taking Valentino and Marion down to the hotel lobby from Marion's apartment about 3 a.m...and seeing Valentino hailing LiCalzi's cab. (Affairs Valentino, p. 330)

Schulman's citation to the source of the article is simply, The Graphic.