I have been organizing images and sorting through my file from my visit to the Frank E. Campbell's Funeral Home in 2003. I had a brief time to take photos of this scrapbook (see below - approximately 5 inches thick) and the light in the funereal room was not great, (all blinds drawn). I was and still am surprised they just plopped the crumbling artifact on the table for me and as the mortician turned the pages, bits and pieces of the relic fell like confetti onto the floor.
It occurred to me in looking at these two of the some eighty images I captured... that the number of those men's hats in the crowd is mind-blowing. Just an aside... but were all the men wearing the exact same style of hat? I understand it was hot and rainy but all the exact same hat? Someone really cornered the market on those straw boater hats that sad day. And the complete lack of any plan there as far as crowd control is horrifying. If someone even tripped they would all go down like dominos.
Oddly the paper in the Frank E. Campbell's Funeral Home's scrapbook was doing the crumbling and the actual articles were fine. I think the book was once a ledger with some enthusiastic employees seizing the opportunity to do a grand record of it all. Who knows what happened to the scrapbook after I announced its location? I tried to garner interest in having it preserved and/or restored some years ago.
Of all the troublesome things that have happened to me because I wrote Affairs Valentino, there have been some exceptionally rewarding moments. And I would certainly describe my afternoon in Campbell's as just that; a breezy, sunny spring day in Manhattan, a welcoming mortician and a great Valentino discovery. 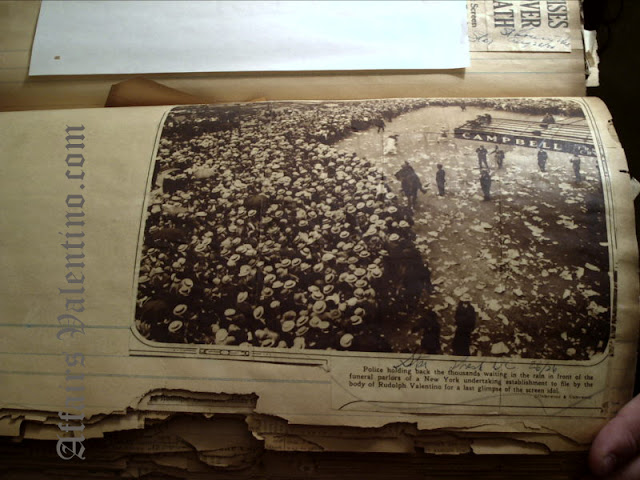 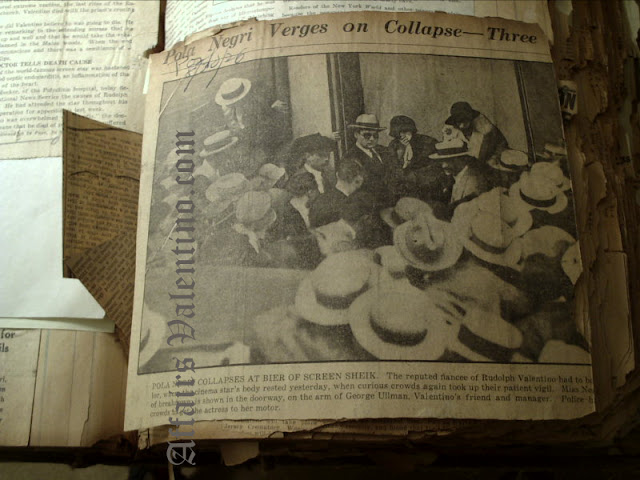