An excerpt from, Revelations on the Beautiful Valentino as a Boarder at Sant'Ilario, Published in Nuova Stampa Sera, Turin, December 8th and 9th, 1950. An insight from Valentino's old friend, Luigino and a gesture of Valentino's memorable generosity. (From The Rudolph Valentino Case Files):

At the end of October 1912, after two years of affectionate friendship, Rodolfo and Luigi parted ways. The following year Guglielmi was preparing to leave for America where after some misery during his early years, he was also employed himself as a gardener showing his diploma as a 'rural agent' obtained at this Agricultural School.

'Goodbye, Luigino!' he shouted from afar the day he left the Institute, 'I will not forget you.'

And in fact, on a splendid sunny morning in 1922, (It was 1923) when his very name was sending shivers of emotion all over the world, Rodolfo Valentino stopped with an enormous American car just a few steps from Luigi Marsano's house. He was traveling with his girlfriend Natacha Rambova. (She was his wife by then) He had visited Paris where the welcome was triumphant and now he was going to visit his family before leaving for New York. But his heart longed for the scent of the gardens of S. Ilario and the smile of his dear friend Luigi Marsano.

'I told you I wouldn't forget,' he said hugging Luigi. And Rodolfo turned his almond eyes around to focus on the sea, which was as sweet and calm as a lake. Rodolfo was emotional as he spoke about so many past things with his old teacher. Then he rose saying Natacha was waiting for him.

'Let's go have a coffee, Luigino. The Director no longer has anything to say!'

But Luigino was dressed in rags befitting the countryside and did not feel like going with the splendid young gentleman to the places where people would have flocked to see him. He replied how you respond to a friend you meet at the market or on the train,

'Thanks, maybe another time.'

Then Rodolfo slipped a five-hundred bill into Luigi's pocket.

'You'll drink it yourself ', he said and left.

Four years later, Valentino died suddenly and, according to some, mysteriously. Luigi was amazed and even today he laments,

Until 1932, Marsano kept the black woolen collegiate cape which Rodolfo gave him as a souvenir when he left the Agricultural School. Luigi defended the cape from all the assaults of collectors. Even a lady who came from America with the intention of buying it. But in the end, an Italian, who almost every day climbed up to see Luigi and who had also offered him a kiss, won the game.

'I couldn't take it anymore,' says Luigino with irritation, “and she managed to snatch it from me in 1932 for five hundred liras. Well, it was in bad shape anyway! I still have his memory inside me and around me, in these gardens where I still seem to see him.”

(below a few memories from the school...) 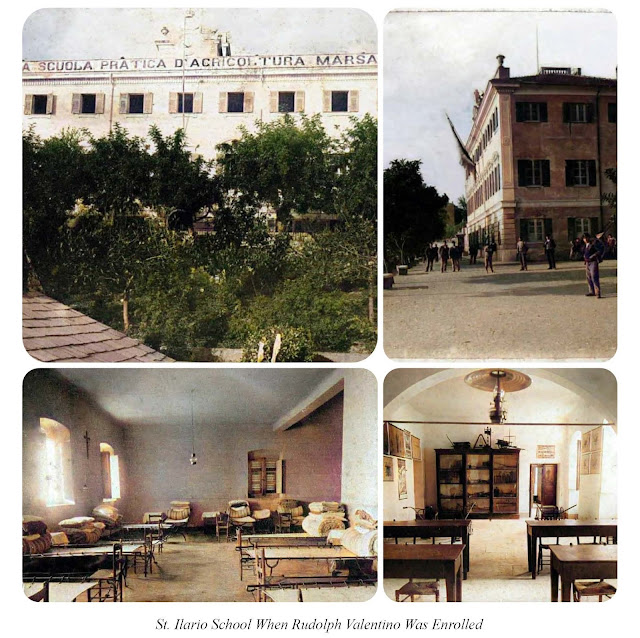