I always found this photograph (see below) interesting in regards to the settlement of Rudolph Valentino's estate. The impact of banker A.P. Giannini on Valentino's legacy can not be underestimated as he became the estate executor after Ullman resigned. As the founder and owner of the Bank of Italy... which about that time became the Bank of America, Giannini assumed control of Valentino's estate and in short order dispersed what was left of Valentino's belongings. The estate which Ullman successfully built up nearly vanished under Giannini's tenure.

Giannini was also the ruin of Valentino's beloved godfather Frank Mennillo. Such was the bad blood between Mennillo and the banker that when I met with Mennillo's family, they told me it was still Mennillo family policy to never set foot in a Bank of America. Find that story in Affairs Valentino.

In this photo we also see Joe Schenck, the man who ruined George Ullman. Ullman held Schenck to contracts signed with Valentino before the star's death which cost Schenck a great deal of money. In retaliation, Schenck funded Alberto Valentino's legal assaults on Ullman. Ullman inferred this in his 1975 memoir and I proved this was the case by connecting Alberto's lawyers to Schenck's United Artists. Between Giannini and Schenck, Mennillo and Ullman would be ruined financially.

I found this image in a biography of Giannini titled, A.P. Giannini, Banker of America, by Felice A. Bonadio. 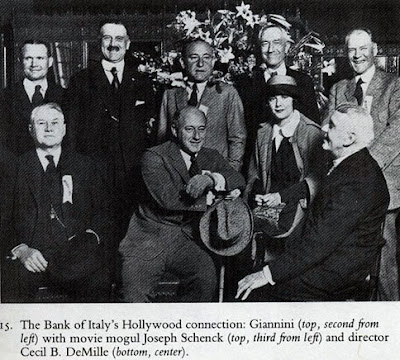