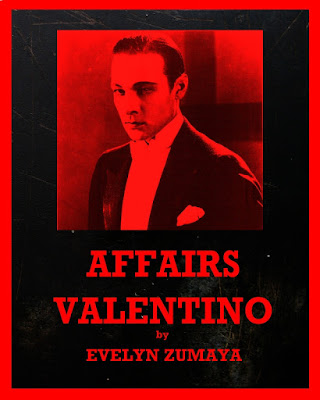 Rudolph Valentino activism. The minute I wrote that in my previous post, I had to pause and think. The story that became my to obey. Incredibly came down to the following:

That S. George Ullman was an honest man, a beloved Dad, a loved husband and a genius pioneer in celebrity management.

Frank Mennillo was a silent benefactor and sponsor of Rudolph Valentino whose presence was expunged for racist reasons.

Natacha Rambova was tarred and feathered and run out of Hollywood because she was Valentino's talented and head strong wife.

I add that George Ullman, Frank Mennillo et al were not Presbyterian ministers, not saints and how would they be... if they were they could scarcely have even related to Rudolph Valentino.

I could go on and on with the elements of one Rudolph Valentino's story which I addressed and which would send me out onto the battlefield to face some daunting foes.

But my enemy would mobilize basically over one discovery I made... Rudolph Valentino was not gay. In fact he was everything he portrayed on screen as far as loving women to the point where I wonder if he was acting in those love scenes at all. What a mind-boggling hoax was perpetuated exploiting some political correctness in that one...

Rudolph Valentino activism for me came to its full realization when I came under attack. My god the leader of the “campaign to ruin me” was the emcee of the Valentino memorial service. Good lord. How is that possible?

And the tenet that Valentino was gay became the fiercest line in the sand ever drawn. I crossed it with a certain armor of research discovery but still I ran into a tidy gang of ruthless sadists who could give a single shit.

Rudolph Valentino deserves better than their ruthless sadism, their lies, their censorship and their utter evil.