The image below appeared as advertising for the biography of Rudolph Valentino written by Baltasar Fernández Cué and was published in the Spanish magazine Cine-Mundial in June 1927. Rudolph Valentino was working on the book when he died and Cué went on to complete the work as Valentino wanted a truer story of his life to be told. 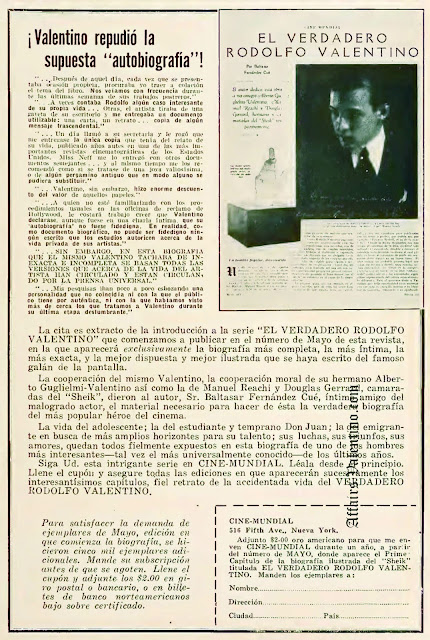 Renato has translated the above advertisement. It reads:

… After that day, every time a propitious occasion presented itself, I tried bringing up the subject of the book. We saw each other frequently during the final weeks of his last job…

… Sometimes, Rodolfo told me some interesting stories of his own life. Other times he opened a drawer of his desk and handed me some useful document: a letter, a portrait, a newspaper clipping, a copy of some momentous message.

… One day he summoned his secretary and told her to give me the only copy he had of the story of his life, published years before in one of the most important film magazines in the United States. Miss Margaret Neff gave it to me accompanied by other similar documents, but less extensive; and, at the same time, he recommended them to me as if they were precious jewels or some ancient parchment which could not be replaced in any way. …

… Valentino, however, delivered a huge qualification on the value of those papers…

… Anyone who is not familiar with the usual procedures of Hollywood studios, will find it hard to believe that Valentino declared, even in an friendly chat, that his "autobiography" was not reliable. In fact, as biographical documents, no writing which the studios authorize about the private lives of their artists can be considered reliable…

… However, from that "autobiography" which Valentino himself accused of being inaccurate and incomplete, came all the versions about his life which have since circulated and are circulating through the universal press and that which was not published in the newspapers, has been published in book form....

…My research gradually began to sketch a personality which did not coincide with the one the public believed as authentic, or with the one we had seen more closely... those of us who frequented Valentino during his last dazzling stage. "

These quotes are excerpted from the introduction to the series, "The True Rudolph Valentino" which we began publishing in the May issue of this magazine, in which you find the most complete, most intimate, the most accurate, best organized and best illustrated biography ever written of the famous gallant of the screen.

The collaboration of Valentino himself, the moral cooperation of his brother Alberto Guglielmi-Valentino, as well as that of Manuel Reachi and Douglas Gerrard, buddies of the "sheikh", who gave the author, Mr. Baltasar Fernández Cué, a close friend of the unfortunate actor, the material needed to write this true biography of the most popular film hero.

Teenage life; that of the student and the early Don Giovanni; that of the emigrant looking for wider horizons for his talent; his struggles, his triumphs, his loves are all faithfully portrayed in this biography of one of the most interesting - perhaps among the most universally known - men of recent years.

Follow this intriguing series in CINE-MUNDIAL. Read it from the beginning.

Fill in the coupon and make sure you receive all the editions in which the most interesting chapters will appear, a faithful portrait of the eventful life of the 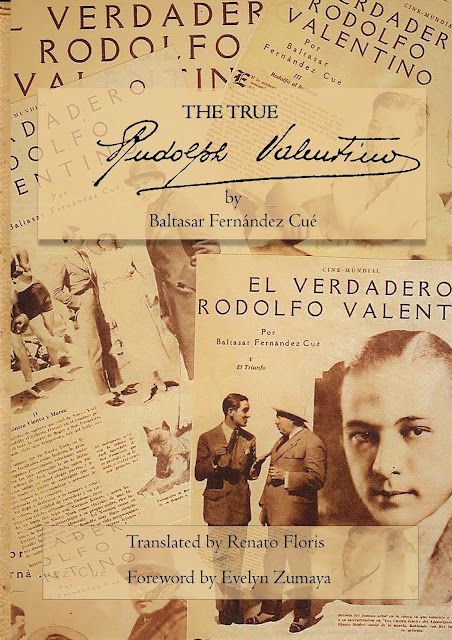 Renato translated the Cine-Mundial series and it is now available in English. (see above image) It has been alleged Cué was not a house guest at Falcon Lair in 1926 and that Alberto Valentino did not endorse nor approve of the book. This was proven to be false by an important voice; the voice of Jeanine Villalobos, Valentino’s great grandniece who wrote her doctoral dissertation about her famous relative. She wrote how she relied heavily on the Baltasar Cué book and confirmed her great-grandfather Alberto Guglielmi Valentino believed it was a true and authentic representation.

Ms. Villalobos confirmed Baltasar Cué was a house guest at Falcon Lair in 1926 and that Manuel Reachi and Douglas Gerrard worked with Cué after Valentino's death. She writes,

“...Subsequently, much of Cué’s information has been substantiated, and my documents verify even more, which leads me to place a high degree of confidence in Cué’s claims. My great grandfather hoped that these series of articles would stand as the definitive biography of Rudolph Valentino. The irony, of course, is that because of the articles’ obscurity and the lost story on their origins, no biographer has ever used them.”

(This quote is an excerpt from the Doctoral Dissertation of Jeanine Villalobos, great grandniece of Rudolph Valentino.)

It was for this very reason, Renato wanted to translate the ten installments of this unique, interesting and passionate work of Baltasar Fernández Cué. Now, thanks to his efforts, this great work is available for the English-speaking audience.
Enjoy the read!