I seem to be living in a film, worthy of Luis Buñuel's purest surrealism or in a creation of René Clair, such as his Dadaist “Entr'acte”, of whom I place an image here below with Rodolfo Valentino and Rolf de Maré.

When I happen to read the delusional post of Tracy Ryan Terhune, who from a blog he kidnapped from the legitimate owner and from a blog having the title of the book she wrote, says he is bullied by his own victim. Terhune also accuses her of being motivated by hatred towards some "innocent" creatures whom he lists as "victims" of Evelyn Zumaya.

Nothing could be more surreal and absurd!

Evelyn Zumaya does not hate, but defends herself.

Evelyn Zumaya is unable to hate and is not a wild fool, as stated by Eleanor Gribbin in her recent post aimed at dissuading a person from reading Evelyn's book.

Evelyn Zumaya does not disguise herself in order to spy on groups in which she is not welcome.

Evelyn does not send herself anonymous messages.

These statements are only the result, in this case, of deep hatred on the part not only of Tracy Ryan Terhune but also the blatant silent support of the other people on his “victims” list.

The thing that baffles me most is the deafening silence of Valentino's descendants who, with absolute apathy, observe the nefarious and shameful attacks on Evelyn while they crouch like hens roosting on the precious relics of their ancestor. I hope that someday another eagle will be born in that nest of owls who will restore a healthy dynamic in Valentino's cultural heritage.

It would be good if Tracy Ryan Terhune and his minions, before daring to pronounce the name of Evelyn Zumaya, rinse their mouths out well and do so with due respect. Evelyn is a sensitive and kindhearted person, unable to hate and lie. I have known her for over eleven years, and I can well say that rather than lying she bites her tongue.

Hiding games are not part of her modus operandi just as they are not part of mine. Both Evelyn and I never lie because we do not need to and because it is repugnant to us, everything we say responds to the absolute truth and I do not compromise on this.

Evelyn and I would like to be able to proceed serenely in our research activity and enjoy the serious possibility of being able to share our discoveries. However, the truth frightens those who have established their credibility on a heap of lies, so many that they have become indefensible.

I am sure that some honest mind hides within this horde spreading hatred towards Evelyn and me and that, in a time, which I hope is soon, they come forward and all lies will be revealed and the truth restored.

However, I advise every person on Terhune's “victims” list to read and understand Evelyn's book without dwelling on the typo or the trifles. The brightness of thought lies in reading and understanding without prejudice. Wake up, choose the light and stop living in the narrow darkness of insane prejudices. 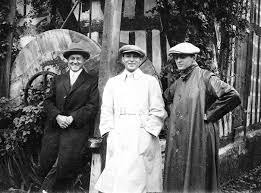 On Valentino's right, Rolf de Mare and on his left, Rene Clair


I open this update with a few important lines from “IF” by Rudyard Kipling, the lines are in French because it was in French I learned them long ago.

I add that I did not write that this image was taken on the set of Entr’Acte.

Regarding the fact that this person on Valentino's left is René Clair; this has been verified by the Icono section of the Cinémathèque Française.

This is the response to my request for clarification on the identity of the person at Rudolph Valentino's left. The curator of the image sector replied with the following message:

(English translation of the verification e-mail)
Hello Renato,
After checking the different portraits we have of René Clair, we confirm that it is him who is in the photo and not André Daven.
Hoping to have answered your request ...
Remaining at your disposal,
Best regards,
xxxxxxxxxxx 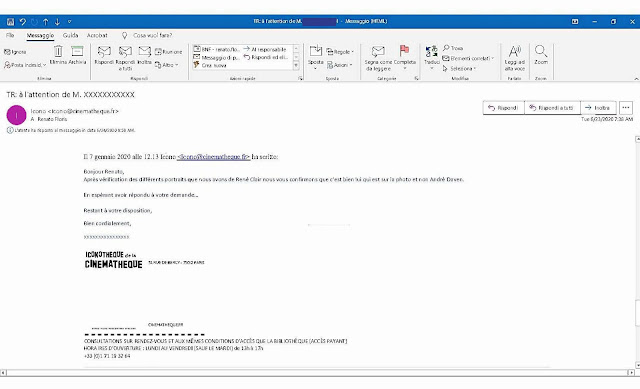