In a previous post on this blog, titled "The Masked Model", I shared a notice sent to me regarding the book "Max Steiner" by Stephen C. Smith. I learned Max Steiner was the musical director for the road show “The Masked Model” which traveled the U.S. via“the northern route” in the spring of 1917. Rudolph Valentino was a cast member in the show and this is how he left New York City for the west coast.

Max Steiner recollected how Valentino was fired after a disagreement with the show's director and cast members secretly provided Valentino with food and a place to sleep until the show reached San Francisco.

After I posted this tidbit, a friend and researcher began looking into Steiner's allegation. They have since sent me many articles and images from which I share the following commentary. I add they wish to remain anonymous.

We know the show left New York City in early April 1917 and headed to Pittsburgh for a two week engagement. During this time the cast and the show itself went through many changes in preparation for the trip west. Valentino was billed as “Mons. Rudolph”, (Monsieur Rudolph) and he was hired as a ball room dancer. He performed in three numbers, with the audience favorite being a fox trot from “Johnny Get Your Gun”. His dancing partner in The Masked Model was Edith Mason, a seventeen year old protegee who was then so popular she was challenging the reputation of Valentino's previous dance partner in New York, Joan Sawyer.

Edith Mason received far more praise for her physical beauty than her dance moves. But even at seventeen she had already earned a substantial reputation. And in every performance, she danced the ball room steps with Monsieur Rudolph (Valentino!)

The Masked Model would play in Omaha, Lincoln, Iowa City, Denver, Salt Lake City, Reno San Francisco. After their engagement in San Francisco, they would perform down the California coast to Los Angeles. The Masked Model show traveled on a special train with a troupe of sixty-five and they did not loiter. The entire tour took only about one month to reach San Francisco.

Reviews across the country can still be found online in newspaper archives, and they were by and large very positive. It is obvious the show did not experience financial problems as it is often reported to be the case in Valentino biographies. There can be found only small mentions of less ticket receipts after the show reached Los Angeles. Each review of performances across the country reports on the full house and successful ticket sales.

The Masked Model included many well-known personalities at the time including vaudevillian performer Lew Hern. And at some point during the show, a new performer was added to the bill; Joseph Lertaro.

Joseph Lertaro is a cast member of interest as he was Italian by birth and appeared to resemble Valentino. He was twenty-four years old, wore his hair slicked back and was full of old world charm. According to his reviews he could dance...but there was one big difference between Lertaro and Valentino.

Joseph Lertaro could sing. He reportedly could really sing..in fact many people compared him to Caruso and reviews praised his voice and his “pleasant” stage presence. Some local papers carried lengthy interviews with the Masked Model's star, Joseph Lertaro and he was very much a star of the show.

It is fairly obvious Rudolph Valentino could not sing... at least professionally like his countryman Lertaro. The two recordings Valentino made are the only record of his voice, but no matter how endearing they are...he knew he had no career in singing and reportedly wanted all copies of the recordings destroyed.

So as to the mystery of when Valentino left the show.... what was the dispute with the show's director about? When did he leave the show?

Playbills and reviews continue to include Mons. Rudolph in The Masked Model until Reno, Nevada. If he was with the show until Reno, he did not need much help surviving until San Francisco some few hours away. Was he still listed in the cast because the programs were already printed? Did the news reports reference previous notices? Did he actually perform in Reno?

I will venture an hypothesis … I think the appearance of the young, handsome Italian Joseph Lertaro with his voice like Caruso might present a possible clue as to what might have happened. Was there just not room enough in the road show for the two Italians and their mighty egos?

It is also noteworthy in reading all of the articles sent my way, that Edith Mason seems to have disappeared before San Francisco too. The plot thickens.

“The Marshmallow Prince” did not disappear and was front and center when The Masked Model played in San Francisco. His role in The Masked Model would launch his career which was a substantially successful one. After The Masked Model road tour, Lertaro went on to appear in many Broadway shows and once starred with Mae West in her, “Mae West and Company”.

The stage ballroom dancing was not over for Valentino as we know and one article of interest in this regard... When he appeared in the show “Nobody Home” in Oakland after his stint in The Masked Model, he again billed himself as “Monsieur Rudolph”.

So this is what is known to date... and cheers I say that for whatever reason, thankfully Valentino did not end up floundering on Broadway. Within a few months he would be in Hollywood and meet Douglas Gerrard.. and for the rest of that story listen to our latest podcast!

Again I thank the great researcher who did find these articles and piece this together. Excellent work! 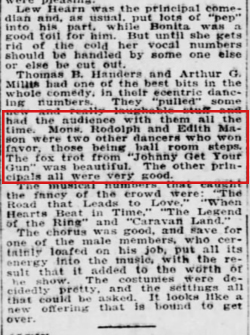 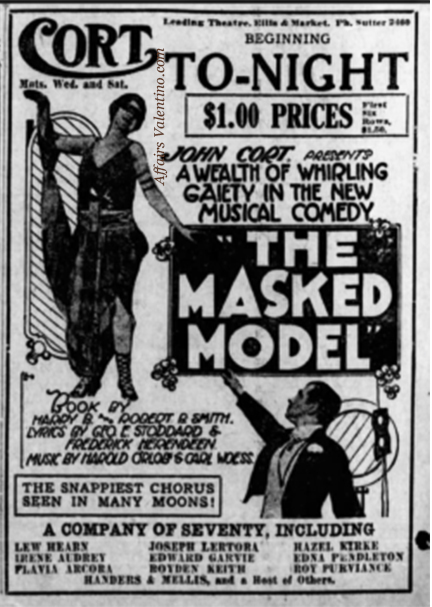 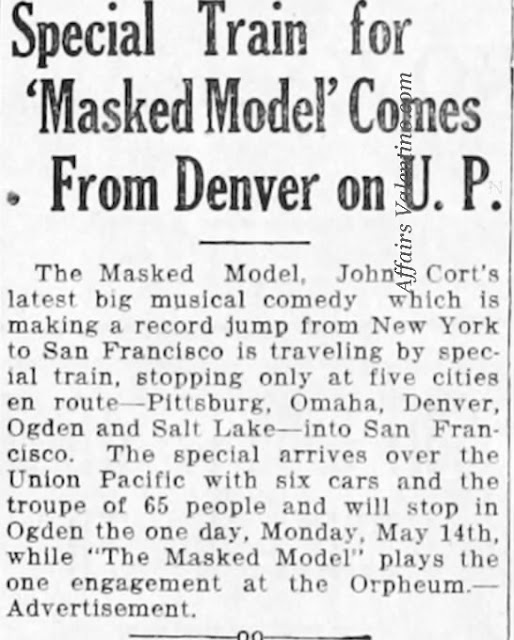 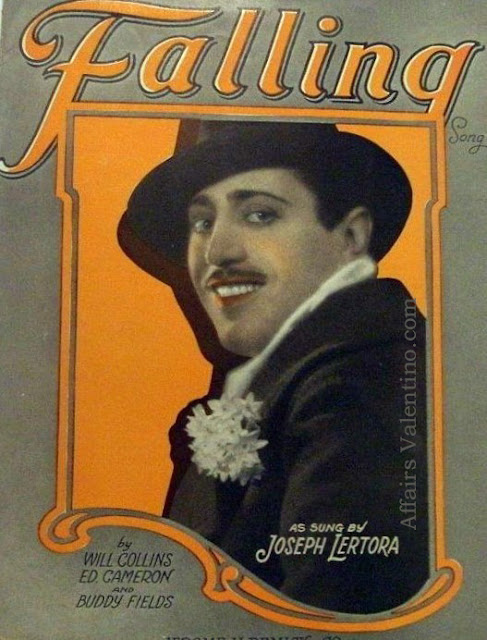 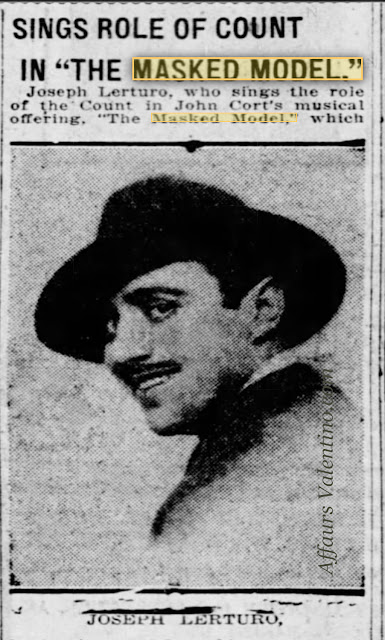 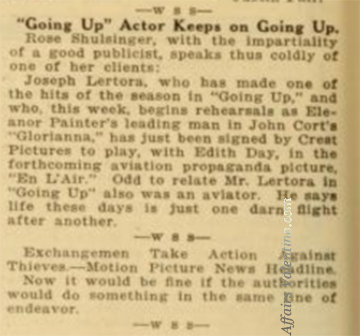 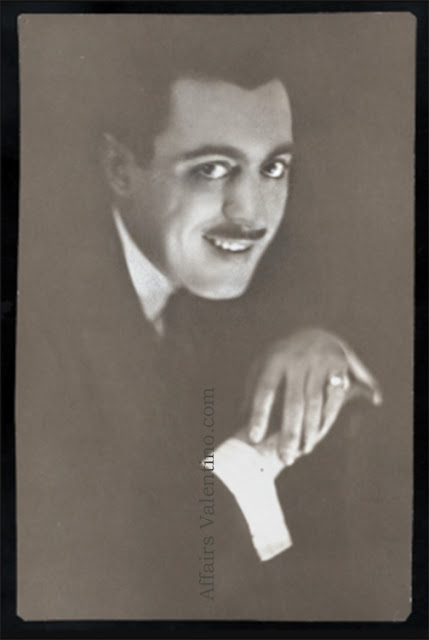 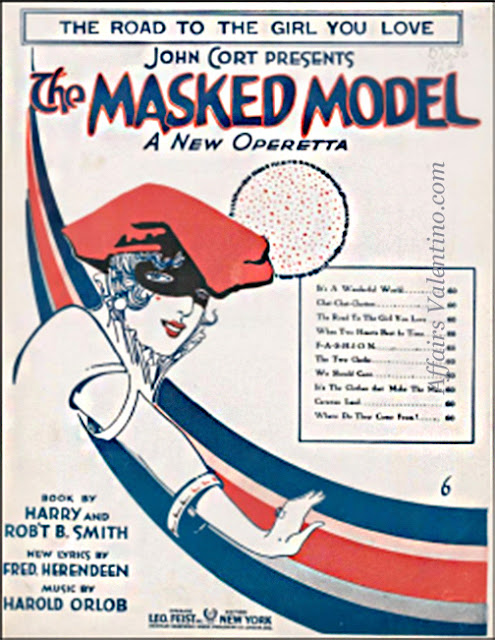 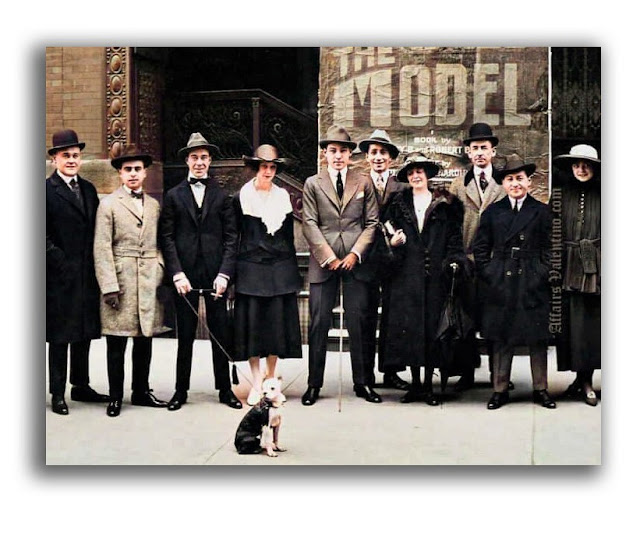