The image below is from the Spanish fan magazine, Cine-Mundial and I do not have a date for it. The caption translated reads:

“Alberto Valentino, brother of the lamented Rudolph, who lives in Hollywood and who is photographed at his desk where he works translating books for 20th Century Fox.” 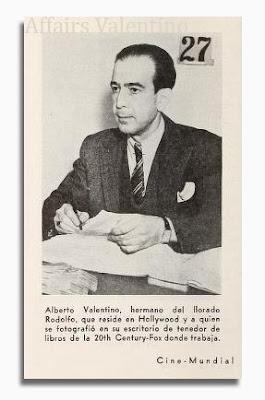 I guess brothers and sisters of celebrities try to get press... lest we recall Brother Billy Carter and his “Billy Beer”. In this regard I think Alberto takes the prize. I am not sure why anyone would ever have been interested in him at all then or now had it not been for his earnest efforts to promote himself.

I think he is a point of interest in the Valentino world today because he began the war like construct which is about as bad as it has every been these days. I have made no secret of my belief Alberto's trenchant disappointment at not being his brother lives today in the irrational fury at Ullman.

Controlling Alberto's bogus version of events still creates the war like dynamic. IMO because even those people invested in controlling it know they are wrong.

I wonder what Alberto was translating. When he arrived in the U.S., and until 1930, he could not speak English well at all. In his court testimony he claimed he did not know what the word, “satisfactory” meant. Who knows? Maybe he was translating Spanish to Italian. But it is not surprising he had such jobs because he had his connections at 20th Century and other studios because of Bill Self.