In thinking about the comments made here regarding Valentino's insecurity, I remembered this item. It is not the highest of quality but Jesse Lasky adds some insight into the “ill at ease” star. (A full transcript can be found below) The story goes that a piece of paper was found in the rubbish which turned out to be Valentino's contract for Moran of the Lady Letty. (see below)

It is interesting to think how many valuable documents from Valentino's life ended up in the trash; or sold to the highest bidder and shipped off into oblivion.

The bits and pieces which survive being destroyed, being offed for a price or secreted away forever in a collector's vault become all the more precious I think. 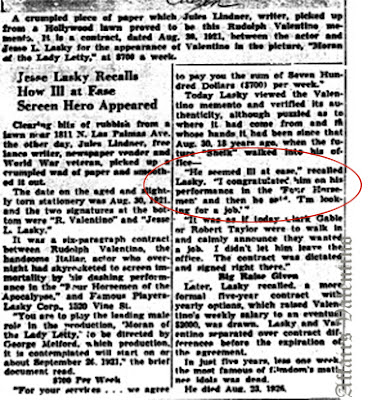 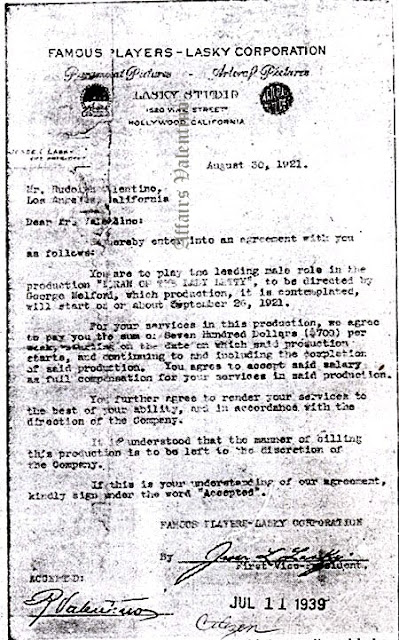 Clearing bits of rubbish from a lawn near 1811 N. Las Palmas Ave., the other day, J. Linder, freelance writer, newspaper vendor and World War veteran, picked up a crumpled wad of paper and smoothed it out.

The date on the aged and slightly torn stationary was Aug. 30, 1921 and the two signatures at the bottom were “R. Valentino” and “Jesse Lasky”.

It was a six-paragraph contract between Rudolph Valentino, the handsome Italian actor, who overnight had skyrocketed to screen immortality by his dashing performance in the “Four Horsemen of the Apocalypse” and Famous Players Lasky Corp., 1330 Vine Street.

“You are to play the leading male role in the production, 'Moran of the Lady Letty' to be directed by George Melford which production it is contemplated will start on or about September 26, 1921, the brief document read.

Today Lasky viewed the Valentino memento and verified its authenticity, although puzzled as to where it had come from and in whose hands it had been since that Aug. 30, 18 years ago when the future 'Sheik' walked into his office.

“He seemed ill at ease,” recalled Lasky. “I congratulated him on his performance in the 'Four Horsemen' and then he said, “I'm looking for a job”.

It was as if today Clark Gable or Robert Taylor were to walk in and calmly announce they wanted a job. I didn't let him leave the office. The contract was dictated and signed right there.”

Later Lasky recalled a more formal five-year contract with yearly options which raised Valentino's weekly salary to an eventual $2000, was drawn. Lasky and Valentino separated over contract differences before the expiration of the agreement.

In just five years less one week, the most famous of filmdom's matinee idols was dead.