The Facts As I Know Them to Be

Since the subject of my reporting how Donna Hill told me the stolen court records were exchanged for one of Valentino's shirts by Jeanine Villalobos, has been misrepresented and questioned....

I file my report as the facts as I know them to be.

I did not solicit this specific information about the missing Rudolph Valentino probate case file from Donna Hill. I never asked her if the court records were exchanged for a shirt by Jeanine Villalobos.

I did ask collector William Self about the case file's location and because of an e-mail he sent to me, (see below) by the time Donna Hill confessed this to me...I knew the file had already been returned to Jeanine Villalobos from the collector who had them in their possession. According to Self and Donna Hill, the collector was Jim Craig. Self did try to negotiate my access to the records when Jim Craig still had them, but it did not happen. Self did not tell me about the shirt exchange.

Donna Hill volunteered the information to me, in front of a third party, admitting that the case file was exchanged for one of Valentino's shirts.

She never asked me not to report what she said, never said it was classified.

She knew I was searching for those missing records at the time and of course this was a very important bit of information which she certainly knew I would include in the book.

I did not use her name in the book and felt this was a wise thing to do then.

I did not cost Donna Hill “friends she had for 20 years”. She did. Oddly, Cindy Martin has accused me of the same thing when I know for a fact she was not around in the Valentino world 20 years ago.

Reporting on this as factual is not bullying but reporting on a story and defending myself. Over the years, Donna Hill has actively aided Tracy Terhune and David Bret in their campaign against us.

While Donna Hill knew about the existence of the stolen case file, I was being accused of lying about its existence and even forging it. She said nothing in my defense.

I did identify Donna Hill in a blog post sometime in the fall of 2011, when she began to openly contribute to the bullying attacks by Tracy Terhune and David Bret. Recently when Renato sent her a formal request asking why she refuses to include any of our books on her extensive Valentino book list, she did not answer but instead passed the request on to David Bret and Tracy Terhune who posted about it on the hate blog they run under the title of Affairs Valentino.

Donna Hill told me about the deal between Jeanine Villalobos and the collector willfully and with no qualifications.

I think it was a very important thing for her to share and at the time I admired her candor. But as she has proven again and again she wants to destroy the “messenger”.... I have lost respect for her as would anyone in my position.

Maybe those “friends” she lost were not so worth the keeping. In my opinion, they are all a band of shady and cruel people whose egos have long since replaced any sense of decorum and decency.

She might hide her involvement with the lot of them, but she has never fooled me. It was never necessary for her to vilify me because of their horrible behavior.  I share Self's e-mail to me about this (see below) and I add that when he tells me he was not interested in buying the shipping case...fact was he already owned it. I excerpt this specific e-mail to illustrate my point made here. 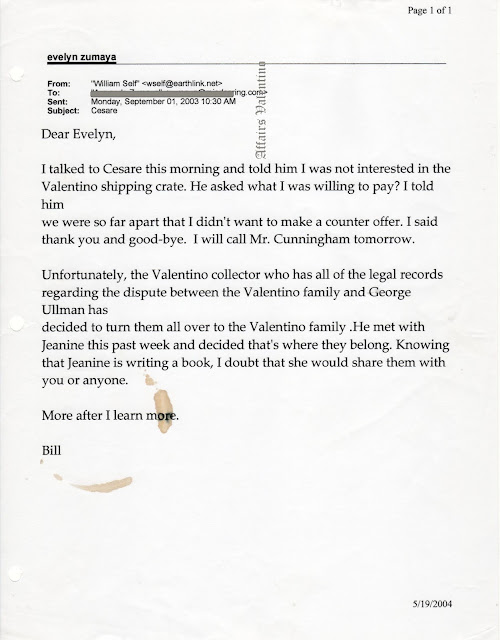