When Rudolph Valentino was fifteen years old, he wrote a series of letters to his friend Bruno. The letters were held for many years in the private collection of William Self. When he passed away, the lot was sold to collectors. While many in the Valentino world anxiously awaited these collector's sharing of the content of these letters, this did not take place. Instead, the lot was broken up with the letters being sold individually in online auctions and before the contents were widely shared. If someone was not aware they were for sale because they did not regularly search online for current auctions of Valentino memorabilia, they would never know these letters were sold and for all intents and purposes... they had completely vanished. The history of those rare, fragile and important letters was lost forever.

Fortunately this was not the case when a letter to Bruno dated August 29, 1910, was purchased by someone who knew me. They contacted me as soon as they received the letter, forwarding images of the entire letter, the envelope and the translation provided by the seller. I then decided I would share this letter's content publicly to ensure it was read by as many people as possible. I also decided my Italian linguist husband Renato should make a careful translation of the letter himself. Today I share his translation as well as a commentary and clarification.

The seller provided the auction house with their translation and I assert they censored one word and included instead a willfully misleading change of content. I address the line where Valentino writes,”faccio l'amore, lasciandone una per pigliarne un'altra, con delle signorine.” This meaning, “I make love with “signorine”, leaving one to take another.”

In the translation provided by the seller, they translate the word“signorine” as “nice girls”.

In this I cite the following:

Below, I share an advertisement for a brothel in Rome, The Rinomata House of Pleasure, the ad dated 1923, where the term “Signorine” is used. Refer to the line reading, “Con due signorine insiema” This is translated as “With two prostitutes together”- (which is priced at twelve and a half lira). And noting that students and the military receive discounts! 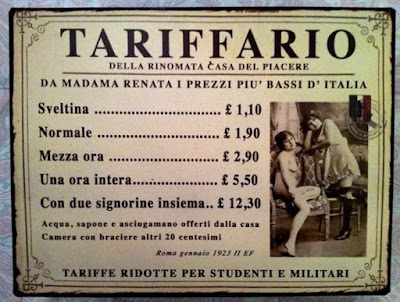 And here a photo with the caption, 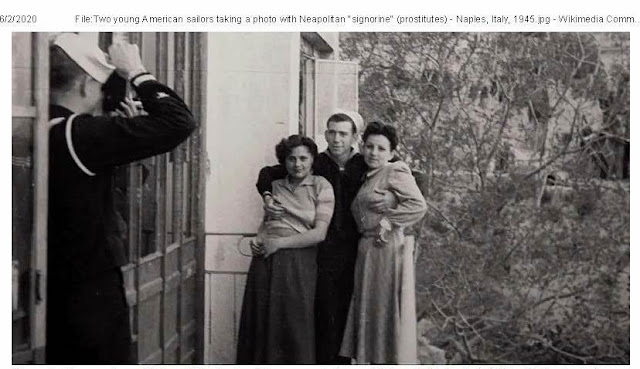 In his letter to Bruno, Valentino uses the specific term, “faccio l'amore”... a direct translation of this being, to have sex as in, “to do the making of love”.. and with “signorine”.

In researching the historical use of this word as meaning prostitutes, Renato found the following insight into this topic. He writes:

In reference to a piece by the Italian poet and writer Guido Ceronetti about the so-called “Demi-monde”. The “Demi-monde” refers to people who live hedonistic lifestyles, usually in a flagrant and conspicuous manner. The term was commonly used in Europe from the late nineteenth to the early twentieth century, and contemporary use has an anachronistic character. In the letter Rodolfo wrote to his friend Bruno dated August 29, 1910, he represents himself, in all respects, as being part of that “Demi-monde”. I excerpt the following from a commentary on this by Guido Ceronetti:

“But I still harbor a certain decadent nostalgia, for that innocent little world of an era gone by when there were some "good things of bad taste"; when the "bad signorine" were called "cocottes".”

“Cocotte” is a French word which means prostitute. In Italy the reason for the slang term of “Signorine” was that it was morally unthinkable that a married woman could work as a prostitute. All prostitutes were, by default, labeled as being single, as “signorine” and thereby the men, as their customers felt less guilty paying for sex with unmarried women.

Another Italian poet, Guido Gozzano, in one of his poems titled “Cocotte”, writes;

Was the word, this well-known slang for prostitutes, “signorine”..changed to “nice girls” purposefully by the seller of the letter to delete the fact that at fifteen years old, Valentino was already having sex with women and many women? I make the allegation that this is so. Why was this letter “offed” and sold into oblivion before it was published widely among the Valentino community? Why change his truth? Why censor and edit his words? So by some quirk of fate a friend of mine bought that letter and now I share it as it should have been previous to its vanishing.

But beyond this, it is incredible to be able to read his handwriting and sentiments shared with his friend; we see a young Valentino so full of life plans and thrilled with three packs of new, foreign cigarettes and his love-making! We see a young Valentino entranced with the military life and hoping to get into journalism. This is history. This is a treasure to be shared and not something to sell online like a tablecloth or a set of book ends. I thank the buyer of this valuable letter for having the awareness that this letter should be shared! Thank you.

For the record, Renato's entire translation of this letter is as follows:

I couldn't write to you this morning because I was aboard the R.N. (the Royal Ship) "Benedetto Brin", to meet up with the Sub-Lieutenant Della Rocca, the son of our business mathematics professor whom I met in Taranto a couple of months ago at the "Marconi" cabaret variety club and so I stayed with him for lunch.

You know that now the naval squadron that comes from Antivari is in Taranto, tomorrow Wednesday 30, they will leave for Venice, and around the 11th there will be all three squadrons with the coming of the king to Taranto. From Mr. Della Rocca I got three packs of foreign cigarettes that were given to him by King Nicholas of Montenegro. Fortunately, cases of cholera in Trani and Barletta have been limited and there have been none. So no worries. I wrote right now that it is 5:15 (PM) on the way back from the ship. If you saw how kind the Navy officers are. Then I was introduced to the Commander in 2nd of Brin who is a very kind person.

Not long ago, a 17-year-old cabaret singer was in Taranto and I had a great time with her. Then, while I am courting cabaret singers, I make love with prostitutes, leaving one to take another.

Give my compliments to Manlio for the race he has won and I wish for him that in the next race he will take not the 6th prize but the 1st. Do you know if Sinigaglia is still in Castelfidardo? If you go to Venice in a few days you will see the naval squadron. If you want a presentation note for Mr. Della Rocca, tell me and I will send it to you. He is holed up now on the squadron's flagship Benedetto Brin, since a boiler exploded aboard the previous flagship Regina Margherita, a few knots from Taranto, and 7 sailors died. So the admiral (of the squadron) who was there before will pass tomorrow or tonight on the Benedetto Brin.

Hi! And a kiss from yours,
Rodolfo.
P.S. Write to me soon and send me those addresses.