A Few Bill Self Notes

So I sat there and interviewed Bill Self and all the while he knew where they were and for a long time did not tell me he knew. He feigned it was a mystery to him that they were gone from the L.A. Hall of Records. In hindsight I ask; really?

In my dealings with Self and after twenty years observing the activities of other collectors, IMO collectors hoard and find some added delight in the hiding aspect of their collections. I used to think this was because they held them sacred, but I don't anymore.

It is about their collection's market value and a lot about shady provenance... those court records have probably already been sold on E-Bay to the highest bidder. Shockingly, those records along with other valuable historical artifacts relating to the life of one Rudolph Valentino... just disappear into the wilderness when they are purchased online by god who knows who, to be lost forever to historians and people, like myself and Renato who care about historical accuracy. For people, such as ourselves who work hard searching through archives for documentation and information, it is discouraging to learn that Valentino documents are sold on E-Bay before the contents are shared at all.

All of these artifacts belong in a museum, whether one devoted to Valentino or some facility such as the Margaret Herrick Library or the USC Rare Book Room. There are many places which I consider appropriate for these rare, archival items to be housed.

The image below is a scan of my notes from one interview with Bill Self which took place in the spring of 2003. Bill did not want to be recorded, and would not speak as freely if I was taking notes. We sipped drinks and chatted. I would leave his place and drive down the hill, park and write all of my thoughts as fast as possible. I would then type them up in outline format. 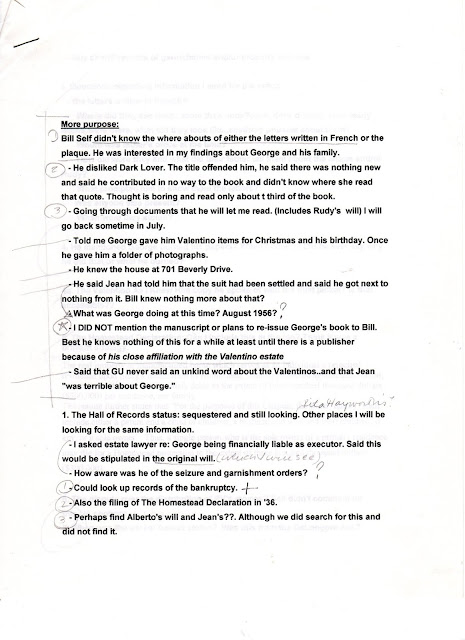