Eleanor Gribbin is Wrong & The "Weak" in Review

Update on this issue: Eleanor Gribbin has posted that I "added" things to Ullman's 1926 memoir and in this way I created the 1975 memoir. This is not a revision of his previous memoir. I state that I worked with Ullman's two children, worked from their only copy of his new memoir he penned before his death in 1975. The 1926 memoir and the 1975 memoir are separate documents and they authorized me with the sole licensing of the 1975 document and approved of the entire final manuscript. I published his work with pride and dignity and Gribbin is slandering me and the memory of Ullman's two children with her absurd and offensive claim. I included the 1926 memoir in the book as a separate document and perhaps Ms. Gribbin should read the new memoir to know it is also a great historical document written by the man who knew Rudy best. I await news of her retraction and am disgusted by her open admission she refuses to read this ground-breaking work because I am not "welcome in her group".

I direct Eleanor Gribbin to page 68 of the 1975 Ullman memoir. This in response to her telling a member of her forum that the incident George Ullman refers to regarding Mae Murray and Rudy is “unsubstantiated rumor”. 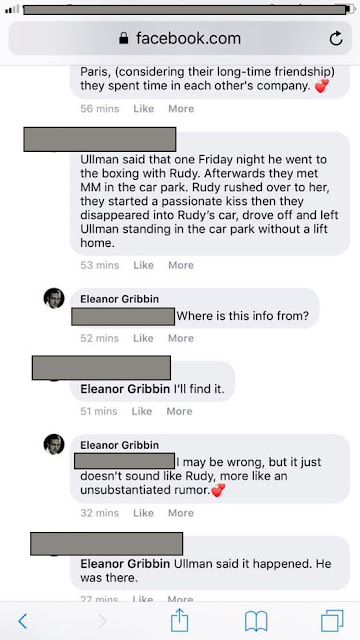 It is not "unsubstantiated rumor" and this story has been in the public domain since 2011 when I first published Affairs Valentino. The forum member was far more informed than Gribbin in relating the details. Rudy did passionately kiss Mae Murray in the parking lot after a boxing match and this was something George Ullman witnessed. ** I add if Gribbin thinks Valentino kissing a woman passionately does not "sound like Rudy", she needs to watch a few of his movies. 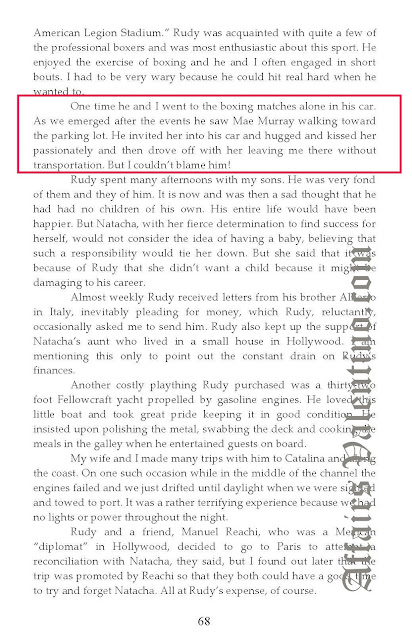 It is mind boggling to me that Gribbin feigns knowledge of Valentino when in boycotting all of our books she has missed enormous amounts of exciting new information about Valentino. This stunning misstep, for me, represents the culmination to a week of horrific blunders on behalf of those doing their worst to ruin us and our work. I hesitated to post these blunders but feel it all needs some calling out. For example to name a few:

This past week Tracy Terhune did not know the difference between Valentino's sister Maria and Valentino's sister-in-law, Ada. He posted a photo of Ada labeling it as Maria when the two women do not look at all alike. Think about that.

A Valentino family spokesperson then weighed in on the subject of Maria to reveal she knew almost nothing … as in zero!...about her.

Tracy Terhune engaged in a conversation with Simon Constable about Maria in which they revealed they still knew nothing about the loan to Frank Mennillo and the subsequent court decisions in that regard; redressing their same arguments and points which were proven by yours truly to be without merit long ago. And Simon Constable proved he still knows nothing about the truth of George Ullman when he referred to his “failure”.. Ullman was never a failure. The absolute contrary is true.

This past week I was banished by Simon Constable with a blaring headline on his forum declaring my name was not to be mentioned. Constable then called me a “bad smell” which was followed by some snarky banter from his side-kicking sycophant Eleanor Gribbin; who issued some disturbing innuendo about Renato and me by saying, “...if only they knew”. I ask...“knew what”? How ominous.

And Bret tried his level best to turn back time to 1998... but I remind him that during the decades since then, since he launched his great hoax way back then by publishing his Valentino book claiming it was nonfiction and all sourced to ground-breaking sources..... his 1998 tome has been proven to be fiction and his exclusive sources non-existent.

His sharing this week of some good reviews of his book from way back then... predating anyone then knowing it was all lies and more...was but the manifestation of his remaining hope; hope that his great hoax, his great lie still has a hint of life left in it. In my opinion it does not and it is dead as the proverbial door nail.

Far more disturbing was finding Cindy Martin chatting it up with a Valentino family representative; yes the very same Cindy Martin who bragged she had our books removed from sale, who accused me of forging court records and told her world on her forum that I never knew Michael Morris and that his posthumous book was my fraudulent attempt to capitalize on his death, etc. etc. I found it repulsive to see that apparently such behavior is Aok with the Valentino family... and shocking they would so casually affiliate with someone who in the very least... and without apology... killed the long-awaited launch of Michael Morris's final work.

So the week in review provided some stunning but not surprising news...revealing that the people banning our work have yet to read a word of it. They might want to get busy on that because they are looking less and less like experts. In my opinion they have a lot of homework to do.