It is obvious Ms. Donna Hill has, to date, maintained her fury at me for telling one story in Affairs Valentino; something she told me long ago when we met after the premiere of Valentino's movie Beyond the Rocks in San Francisco. In her response, she has shunned even a mention of any of our books. But it was the first time I met her when she volunteered the tale which I recounted in the book without mentioning her name. She told me Valentino's court records, which I was looking for, were in the hands of the Valentino family because Jeanine Villalobos exchanged one of his shirts for the case file. But she told me something else in that meeting, again unsolicited... which in hindsight I feel she felt needed to be told. She told me that as far as Tracy Terhune having any proof that Valentino was gay, “He has nothing.”

Ms. Hill knew then I was writing a book and I always felt her telling me those things to be rather heroic; at least within the context of Valentino's true story. They were important things to share.

I have told the story of why I researched the subject of Valentino gay or straight and this can be found @ http://bit.ly/WOC_10-3-2020 . I had no real point in looking into the subject other than to have some answer. My literary agent at the time insisted I have an answer because at the time I did not. It did not take me long to realize a couple of things about that subject and get really upset about what I found.

One, the entire premise Valentino was gay was purported in a couple of salacious and fictionalized books... Two...as Ms. Hill stated, I found nothing but innuendo presented as source and three...fact...you faced being labeled as homophobic if you dared to question the premise or say otherwise.

Tracy Terhune and David Bret have pounded away at this... their... completely bogus premise for decades. As far back as 2003, people were sending me evidence of this. Terhune raging against anyone in his chat room who questioned Valentino was gay, deleting their membership, etc. Two women sent me entire chat threads to show how he called them homophobic. And chiming in with his complete lack of authority, Bret has been using the homophobic attack strategy for some thirty years and long before I stumbled into his cross hairs.

While Bret blasted his, “The only good homophobe is a dead one” mantra everywhere and emblazoned his blogs against me with graphics of how he hated homophobes, he was calling me and mine endless homophobic slurs. (Below, as excerpted under the guidelines of Fair Use ! from my manuscript , Die Evelyn Zumaya Die) 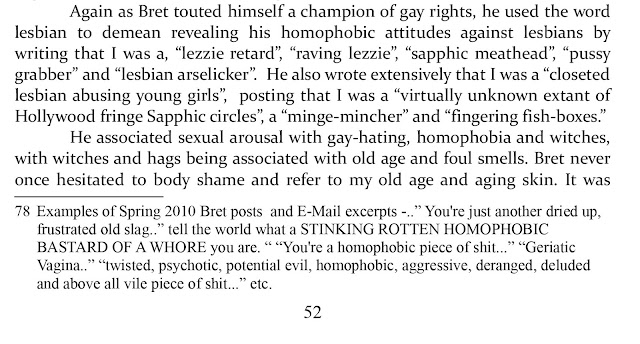 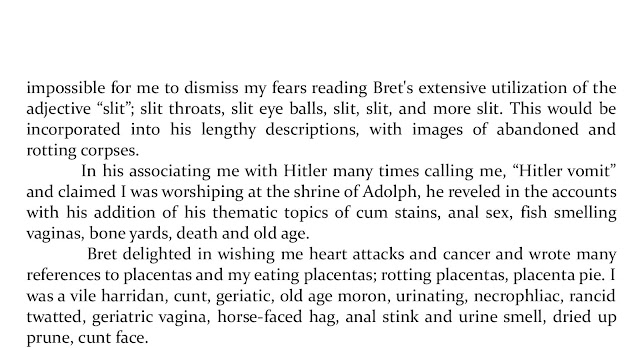 It is a criminal action to incite hatred towards someone in a slurry of insults... i.e., that I am satanic, hitlarian and even dead with their silver bullet being calling me homophobic... but this is precisely what they do. I find Terhune and Bret's appropriation of homosexuality to not only market their innuendo and push their tired old agenda but to attack perceived enemies... highly offensive and very homophobic. Simply because I, (oh so naively), took that stage in Turin to read my research paper, they have not ceased to contort anything they possibly can into their, “anyone who says Valentino was not gay is homophobic”, agenda and produce their hateful diatribes.

They argue that I “want” Valentino to be straight and that this is my agenda. Do their actions not prove this is exactly what they do in forcing their fiction on Valentino? They perpetuated a hoax, a giant lie based on innuendo and worked feverishly to defend it when I came along. Donna Hill was a hero when she told me they “had nothing.” Because she would know.

Terhune was once interviewed by a reporter for the L.A.Times for an interview about this subject. The reporter called me after the interview to tell me that when he asked Terhune if he believed Valentino was gay, he dodged the question saying something to the order of his not being sure. I add the article never appeared because the reporter told me the paper feared a gay back lash.

Saying someone is not gay is not homophobic and it is not done to follow some agenda. It is the result of research and making a knowledgeable assessment based on that research which included a great deal of new, first hand testimonies. Terhune and Bret forcing Valentino's history to be altered in such a manner based on “nothing” is following an agenda.

I came to Turin against my will somewhat. I could not afford the trip but Michael Morris was adamant and he funded my journey and my appearance on that day. But as Renato has pointed out, because of Terhune and Bret my work came to a halt that day as they launched their ready and familiar agenda.

Granted if you agree to say... maybe Valentino was bisexual... you could so pander and avoid their wrath and punishment. I feel this is what author Emily Leider did with her issuing of their surmise saying that “bisexuality is always an option”. Well so is murder for that matter. But including that....guaranteed for her... their undying support. That is running an agenda.

I did not, do not and never will care if someone was gay or not gay. If something credible as proof is discovered.... then that would be amazing historically. This said, in Affairs Valentino I devote but a few pages to the subject and based on my research I found Valentino's heterosexuality to be obvious and unambiguous.

He contracted syphilis at fifteen from having intercourse with the ladies of the night in Taranto, spent his brief life making love and being in love with women and was married a few times... his love life and obsession with and adoration of women was not something closeted and is extremely well documented. Perhaps if I found evidence he was gay, his marriages shams and arranged, etc. as Terhune and Bret espouse as fact... my life would be a lot easier right now. I could have lied, thrown in a fast, “bisexuality is always an option”.. but I did not.

When I began looking into this subject, I was outraged. Not outraged at someone being gay or straight but outraged that someone's truth can be so contorted based on “nothing”. And then to learn this "nothing" is enforced by two men running amok with their agenda of unparalleled ruthlessness. Does not Terhune running that sick blog under my book's title stand as living proof of his agenda in this? I think so.

Tracy Terhune and David Bret have had their day in bashing people for daring to say the obvious and have had their day running their misogynistic hate rhetoric. I call them out. Thank you Donna Hill for contributing to the truth about Rudolph Valentino in this regard and for exposing a deplorable situation which needed, and still needs to be exposed.

As of the date of this blog post and based on all existing credible evidence...I found that Valentino was not gay and I am not homophobic for saying that. And Tracy Ryan Terhune and David Spurr Bret need to shut the hell up and accept and respect this man's truth.