I Respond With An Opinion

I guess if anyone wanted to know who the real heroes of Rudolph Valentino's life were, they could take notice of just who Tracy Terhune and Simon Constable attack. It works that way because if I bring forth documentation that someone contributed to Valentino's life, in their continuing effort to ruin our efforts... they come out loaded for bear... as the expression goes... and on their predictable attack. They call it “debunking” but it is vicious distortion.

They have a simple format all in all... to find some small item which can be used as a starting point for their contrived narrative which they saturate in innuendo. No matter how many times I have pointed out the endless innuendo which they use to “debunk”, they do not seem to either comprehend what I am talking about, as in exactly what is innuendo... or they think it fine to muck up Valentino's truth with all sorts of haphazard and personally motivated implications...all of which are never sourced or valid.

If I mention anyone they rush in on the assault. This has been the exact case with my friend Michael Morris, my husband Renato Floris, George Ullman, Frank Mennillo, Natacha Rambova and most of all with Valentino himself. For while they scurry about thinking themselves geniuses as they devise some new ruination, what they are actually doing is ruining the legacy of Rudolph Valentino.

They portray him as rather dim-witted and clueless and surrounding himself with crooks. And with what is left of their trashing of his legacy by falsely portraying the people he trusted and loved as being crooks... they deliver the final blow with their innuendo. Imagine if Valentino knew about what they do in this regard and he could weigh in on it?

Tis' a sad, sad thing for us to bear the brunt of these snarky innuendo fiend's attacks as they deny the new history we bring forth and broadcast how all of our work will be in the “trash bin of Valentino history”.. (cite Terhune)... It is a sad, sad thing people who behave in this way... as some kind of Valentino Luddites... are believed at all.

On this subject of the Valentino Luddites... I respond to Terhune's odd attack on us for not loving his crypt service... well his argument it is a “fine Hollywood tradition”... carries no weight with me. Some things considered “fine traditions” are no longer so and should be stopped in my opinion. And many “fine traditions” have been done away with; i.e. the “fine Hollywood tradition” of casting white actors in non-white roles, the “fine” tradition of black-face entertainment is thankfully over with... and according to a Time magazine article, “Hollywood is Suddenly Serious: That's Not What America Needs Right Now”, by Stephanie Zacharek, published on March 1, 2018...”Hollywood is examining everything in a new, more starkly revealing light. Over the past five months alone, Hollywood has moved quickly to right long-establish wrongs and to rattle ancient modes of thinking...”

I have made no secret of my being uncomfortable with the “fine tradition” of the service in the crypt where Valentino tries to rest in peace. And I have little doubt my distaste for that is due in great measure because of the person who emcees the current celebration there every year at the exact moment Valentino breathed his last.

Because after a decade of tolerating this person's abusive and public, “Campaign to Ruin Evelyn” (cite Cindy Martin), who continues with his abject cruelty towards us (name-calling, ageism, death-watching, sexism, homophobia, transphobia, etc.)... in my opinion he is no longer worthy of the position.

But I am not the only person who thinks this is not a fine Hollywood tradition... but a macabre opportunity for insecure collectors to inflate their roles in Valentino's legacy by displaying their toys while trading the man's earthly remains for a quick profit and ego boost. That is the most distasteful aspect of the event.

Plenty of people, myself included will go to Hollywood Forever to pay homage to that sacred crypt. We will walk down that marble hallway, our footsteps echoing in the quiet as we anticipate. We will give our blessing to the man's final resting place and perhaps leave a beautiful flower or note.

But I personally have a problem with someone positioning himself and his collection of valuables, with the crypt as a backdrop while usurping Valentino's glory and meting out certain relics for his followers to touch, wear, preen over... and while slathering this display with a thick layer of religious self-righteousness.

I am not the only person who took exception with the services there. And on this I share what might be the only thing with which I am in full agreement with Alberto and Jean Valentino. (see below) 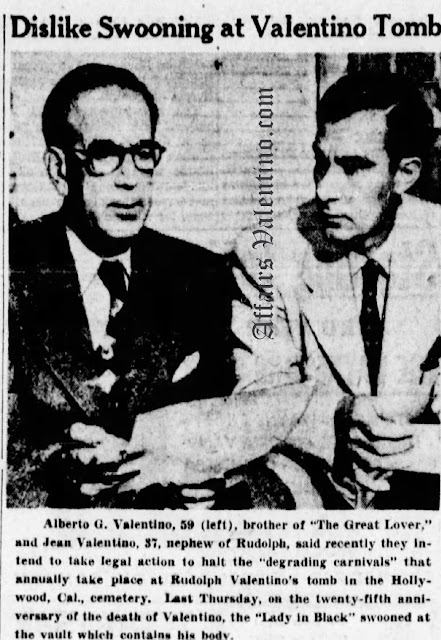 Terhune took exception (calling me a disrespectful person) with my posting a communication I received in which someone referred to his show before Valentino's grave as a, “burlesque”.... I have to ask...

I know in the past, the emcee has pointed out that today the Valentino family attend the crypt fest but I say to that; shame on them for not knowing what the emcee has been up to on that bully blog. And if they do know what he does there to us... then more shame on them.

Perhaps, again in my opinion... if someone who had a nano of interest in Valentino beyond their merchandise, the almighty dollar and their own fragile ego was the emcee, I might not find it all so... distasteful.

And in closing... remember.. if you want to know who stands tall as the true and real heroes of Rudolph Valentino's life...Terhune and Constable's hysterical debunking will let you know.