In previous posts I have detailed how Alberto Valentino gave a lifetime of interviews in his role as the only brother of Rudolph Valentino. One of his major talking points in every single interview... was his lamenting to interviewers that he and his sister Maria never got a penny from Rudolph's estate and only received a “few items” of “sentimental value”. After reading from the “Reporter's Transcripts”... or the court testimony... from the case Alberto brought against George Ullman, Alberto's claims are proven baseless. I add that these records are only publicly known about as I discovered official copies of about 1000 pages of them. The originals are still in the hands of the Valentino family and collectors.

The advances Alberto received against his future share of Rudolph's estate were all charged against Ullman when that second page of Valentino's will was discovered in 1930. Today, I address one small aspect of those advances which were absurdly held against Ullman by Alberto Valentino for some thirty years; with Alberto ..through a cruel legal loophole... trying to collect money from Ullman which he, Alberto spent and which Ullman advanced to him in good faith. (More about that in Affairs Valentino)

I address here specifically...the subject of Rudolph's Franklin Coupe. In this page of testimony, (below) the judge is clarifying that the “purchases” Alberto made at the estate auction were “charged as advances” against his future share. Alberto did not pay cash, out of his pocket, for his purchases. 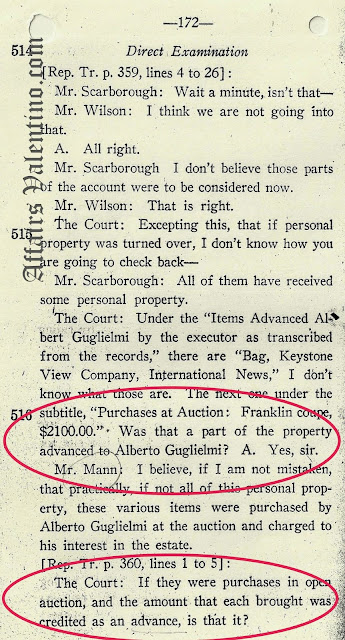 As we know all of those advances were about to be held against Ullman because a critical page of Valentino's will was then missing. One of Alberto's estate auction “purchases” which was charged against his “future share”... was Rudolph's Franklin Coupe. 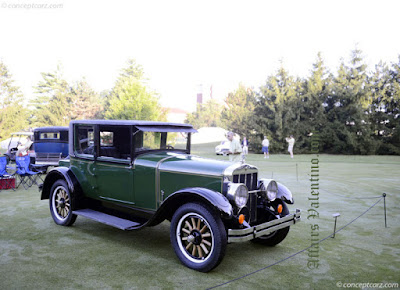 Bear in mind that the popular family car in 1926, the Ford Model T Runabout cost $360.00. So the car Alberto drove away, priced at auction at $2,100.00...(charged as an advance against his future share) was substantially more valuable than the average vehicle. The point to be made here is that while Alberto Valentino was driving around Los Angeles in his Franklin Coupe, he was having his lawyers pursue Ullman to pay him for the cash value of the car. How absurd is this?

When Alberto learned that second page of the will was found, which proved he had no future share of Rudolph's estate... logically he should have returned the Franklin Coupe to Ullman as an asset belonging to Jean Valentino. Technically, the Franklin Coupe belonged to Jean... but Alberto saw to it that the cash value of the car was added to the amount of the “advances” made to him by Ullman... in this instance in the form of that car.

Add to this...While tooling about Los Angeles in the Franklin Coupe...Alberto then proceeded to viciously impugn Ullman as a villain for decades, claim he never got a penny and only insignificant items of sentimental value from the estate and tell anyone who would listen how lawyers took all the money so Jean had nothing. No, that is not what happened at all.

And I can imagine Ullman's reaction seeing Alberto driving that Franklin Coupe... while he was being forced to pay the man for it out of his own pocket. Not such a small sentimental item I say.