Natacha Rambova was articulate about her experiences in Hollywood and her marriage to Valentino in a candid interview she granted to journalist and friend Herb Howe which was published as, “Her Years as Valentino's Wife – Natacha Rambova's Marriage to the Greatest of Screen Idols Came to a Tragic End”, which was published in The New Movie Magazine, December 1929-May 1930.

This passage (below) is particularly well-said. I included the entire article in Astral Affairs Rambova and highly recommend it as insight in the Valentino/Rambova marriage. Herb Howe asks Rambova:

“Do you think it possible for two people to succeed with marriage there (Hollywood)?” I asked, “not just ostensibly but actually? ...or even with great friendship?”

“The only possibility, I think,” she said, “would be if they kept entirely out of it all and recognized it for what it's worth. Ah! - that's it. You are young, appearances are deceptive; you do not realize you are losing perspective and being absorbed until you are swallowed up. Hollywood is a hot-bed of malice. It seethes and boils in envy. Never a good word is spoken of anyone unless for publicity or to gain some personal end. Sweet words of flattery have vinegar on their breath. Eyes of malevolence watch you and even as you feel the tearing tongues of back biters. People go places out of fear. Fear is on parade: fear of being forgotten if you are not in the procession, fear of being talked about if you stay away and fear of the ravening critical eyes when you are present. It's a terrible thing and thank God I'm out of it all!” She spoke with mirthful detachment even of Hollywood, with an amused mockery that embraced herself.

“Exactly,” she said, “And particularly at your own ridiculous self for taking it all so seriously.”

“And will you ever return?”

“Well, hardly! I have not heard from anyone there and do not expect to hear...” 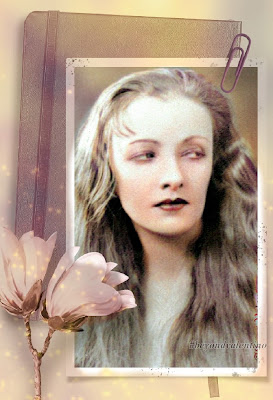