In Regards to Mary O'Bannon

I have been made aware that Mad About the Boy Administrators Mary O'Bannon and Eleanor Gribbin feel they have made peace by saying they will not mention our names, etc. if we do not mention theirs.

I would like to inform them that the mention of our names and work has been forbidden in their group for a long time and still is so what has changed? Their ploy to call it something else, to re-brand their boycotting, is obvious and should be insulting to anyone in that group. And it is not just that they do not mention our names, they forbid anyone from mentioning our names.

It is not just a question of their boycotting our work, forbidding anyone to even ask a question about us and our work but it is their long history of insult, defamation and protecting David Bret under his various aliases despite his being under a court order not to mention me online. Eleanor Gribbin has replied to few questions allowed about my book Affairs Valentino by saying it is nothing but the “ravings of a mad woman” and posting such things as the following: 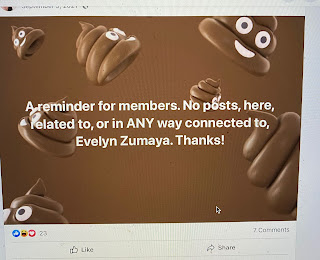 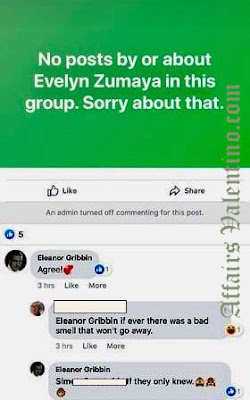 My defense posted here refuting the overt lies being told by Gribbin and Marytin O'Bannon on their new, “Haven”, is not negativity, it is not social media drama... it is defending our livelihood and our reputations. I am standing up to the wanton trashing they do about us and our work. Who would do anything differently in such a circumstance?

This is not a spat, a war with a truce to be called. There is instead justice to be had. We are survivors of ten very long years of their heinous trolling, bullying, boycotting and defamation. It is not a war when one of their own, David Bret attacks my father in the days after he passed, it is not a war when he loads the internet with false names about me calling me homophobic, a fraud, and worse.

There is no truce to be had when the one who masterminds the “Campaign to Ruin Evelyn”, as they call it according to Cindy Martin, when he, Tracy Terhune mocks our deaths with his “tick-tocking” and when they bully my husband Renato by calling him the “man who wears a dress”. Here is the deal.

As long as Terhune continues to run that malicious, designated hate blog under my book's title, where he diverts my web traffic to find David Bret's illegal defamation posts, I will continue to defend us and our work. Imo they all form a true cancel mob and have for many years.

Oh the aliases....Mary O'Bannon, Cindy Martin, Mrs. Trellis, Joey Jenkinson, Albert Morris, David Bret, Etienne who likes to be called Stephen.... EdelMan, various forms of Edel surnaming, etc. It is kind of frightening I think to have these Facebook Groups run by these ghosts who we all know are not who they claim to be.

No, Marytin O'Bannon, no tea in the parlor with you and Ms. Eleanor until that blog is gone, until amends are made for the years of lies told and censoring of our work done with your blessing. And while you are at it you can cease feigning ignorance of Bret's aliases and Ms. O'Bannon, you can drop all pretense of being anyone other than who we all know you are.

Renato and I continue to represent ourselves best we can and our doing so here on this blog is not negativity but strength and pride. Life is tough enough and these people need to get lives and stop torturing us and viciously damaging the results of our hard work.

** Note to David Bret: You can save your time sending in comments to this blog. I am not opening them and just sliding them over, unopened, into an email forwarded to new lawyer.