* The sentiments expressed in this blog post are my opinion based on my decade of documented nightmarish experience and screenshots as proof of my statements will be forwarded to anyone upon request.*

Yesterday someone contacted me to ask if I thought an “Albert Batista Morris” was David Bret. I answered yes and I did some research in an effort to support my answer about this very present commentator on those Facebook groups: Mad About the Boy and We Never Forget. I do know David Bret can no longer appear under his own name on those groups or seems members up and run for the exits.

On Mad About the Boy, administrator Eleanor Gribbin, (who has called my books the “ravings of a mad woman” and forbids even the mention of my name) openly engaged in a fierce disparagement of David Bret and issued his banishment from the group with members chiming in with disgust and hatred for him and his books. Despite a banner reading, "Anything written by David Brett (sic), is not welcome in this group, Thank-you, Eleanor” and her engaging with members in calling him “vicious, “a trouble maker”, “disgusting”, etc.“, Albert Morris is still there and everywhere on Mad About the Boy and We Never Forget. I understand people use aliases online, for personal safety reasons and it is legal. But I feel in the case of Albert Batista Morris, it is something to warn people about for two reasons: one... who he really is and what he has and still does to people and two... those administrators of those two groups know he is David Bret and are deceiving their membership 100%.

Why should David Bret not be on those sites? Ask them. Terhune allows him to openly trash us on that blog he runs under the title of my book (in violation of a court order), but on his two main Valentino Facebook groups, Bret has been banished. Or has he? I say not at all. To expose this utter hypocrisy and deception...I cite the following:

A cursory review of Albert Morris' Facebook page tells us many things he wants us to believe about this character.. He claims he as “author”, was born in 1957 to a Cuban mother and an American father and says he lives in Miami, Florida. The account was opened in June of 2011.

It seemed out of the ordinary that this page with no personal information other than “author” would have some 2400 friends and hundreds of followers. The friends list was obviously purchased because there was no geographical or familial commonality; it was as random as can be. One can easily buy Facebook friends on many sites (which I will not link to here because I think many are corrupt) such as“Genuinelikes”. (Just Google, “Buy Facebook Friends and Followers to find them).

This said those sites, eager to sell you an impressive list of a fast thousand of Facebook friends will not customize it and in Albert Batista Morris' list we find a wild disparity from a sales person at a waffle house, to horse trainers in Punjab, public high schools in Paris and Flint, Michigan, the Mayo Clinic, Subway sandwich makers and someone named Satvindwe Singh, who lists his occupation as “studying at student.” But lo and behold, as I scrolled through, I saw one name which stood out, “Eleanor Gribbin”. Wait a minute I thought, this is the same person who recently banned Bret from her group. And yes, predictably Albert Morris recommends Bret's books and lists them as his “favorites”.

As we had Albert's date of birth and full name, we searched for any records on file on Ancestry and found nothing. There were many Albert Morris entries, but none with the middle name of “Batista” and none with this name born in 1957. He does not exist. A White Pages directory search revealed the closest “Albert Morris” lived 606 miles from Miami, Florida in Savannah, Georgia and is 75 years old. And Albert Batista's claim of “dual citizenship” is false as no documentation on this is filed in online immigration archives.

Knowing Bret is wont to hack into dead people's Facebook pages and I cite Cindy Martin writing Renato on May 29, 2019 and excerpted from an exchange that day,

...I imagine that young man whose images appear on the Albert Morris page could very well have passed away years ago.

As Morris claims to be an “author”, my next stop was his Amazon book listed for sale titled, “The Fabulous Million Dollar Sand Bar”. The book's blurb reveals Bret's common themes of “show biz glamour”, “cafe society” and the story of a boy who, “dreams of being a writer and escaping the step-dad who persecutes him for being different.” (Bret's own story?)

Here we also read the fantastic bio he posted which tells us of his blood relation to the Cuban dictator along with a five star review written by a “William Bostock” who also does not exist (except for a Senior Commander in the Royal Australian Air Force who died in 1968 ). The writing of the mile long review includes such high praise as,

...“ breathtaking in its psychological acuity”, “... the Miami setting is evocatively rendered and heightens the novels power”, “ the novel is stylistically complex in its symbolism”, a “spellbinding fable”, “the sentences sparkle like cut and polished diamonds” and the “lyricism of the prose is ethereal”. So there is all of that.

This was pretty much it for Albert Batista Morris' presence online as an “author”, except for a mention of his website @https://www.albertbatistamorris.com/ . I found this is a Wix hosted site, a format I use for my websites. But other than posting his name on the Homepage and contact page, Albert did not understand that to customize the site you have to build each page with your own items for sale and information. The generic template remains untouched with blank spaces as suggestions, such as, “I'm a product” and ads for lipstick and fictional stories written by generic authors used only as samples.

Wix hosted websites are not cheap and cost 125$ a year to run without ads. Since Albert's website has no ads, he is paying for that service while telling a court he has zero dollars to pay us a penny on those tens of thousands of Euros of damages awarded to us by the Court of Asti.

The contact info on that website states Albert Batista Morris' address as: 4058 NE 7th Ave., Oakland Park, Florida. A Google maps street level search of this address revealed this as an alley/string of storage units and 4058 as the address of the Brooks Cremation and Funeral Service. Here is Albert Batista Morris' home, sweet home, in Miami: 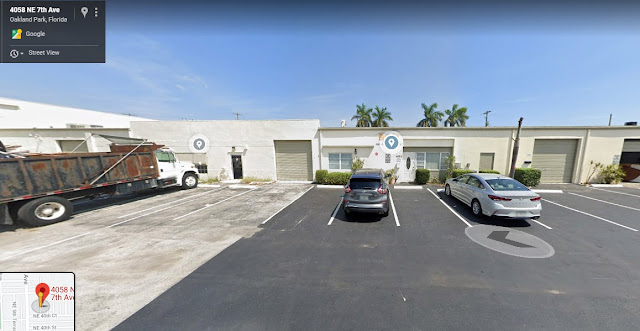 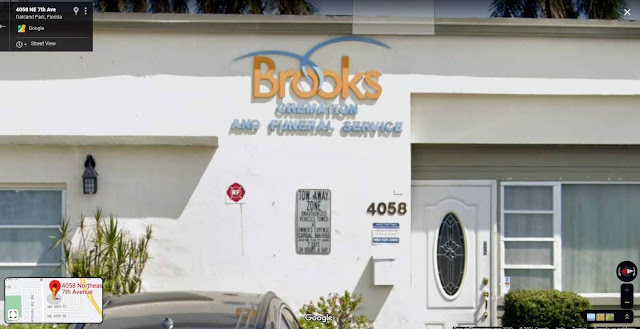 Now of course I knew before I even set off on this little trip into the actual reality of one Albert Morris that this was David Bret. This because on May 29, 2019, his friend, co-hort, phone buddy and confidant Cindy Martin wrote Renato and I excerpt:

I guess we can now add this fake relationship to Batista, “Fulgencio Batista y Zaldivar”, the iconic Cuban dictator...to Bret's ever-growing list of fake (imaginary) famous relations, friends and sources. In my expert opinion I firmly believe he has no relationship, as he claims... to Andre Daven, was never in contact with Daven's wife, never received a stack of Daven's letters, never met Greta Garbo, never spoke a word to Marlene Dietrich (if he had those tapes he would be playing them everywhere), owns no Valentino diaries, never knew Chaw Mank (who died years before Bret wrote a word on Valentino)... and never knew all those famous porn stars he claims so proudly he hobnobbed with whose names I have fortunately forgotten. I think you see what I am saying... and the list is long and getting longer.

I find it the height of hypocrisy that Eleanor Gribbin, Simon Constable, Tracy Terhune, etc. would claim public disassociation with David Bret to their Facebook group members, yet knowingly permit him as Albert Morris to participate in those discussions with people who would not be there if they knew who they were talking to. Perhaps it does not merit explaining why to most people... but...

This man, David Bret, as Cindy Martin said, “masquerading as Albert Morris”, has now spent over a decade writing about my death, our deaths, sharing his “witty death wishes” for us (in gory and violent detail) and reveling in his brutal countdowns to our deaths.

This is a man who lied about me to the world in a million different ways... claiming I have a drug and criminal history, that I use cocaine (calling me cokehead and saying I have arrest warrants out on me), calling me homophobic a million and one times ("the only good homophobe is a dead one"), mocked and terrorized me and mine with images of corpses and death and claimed of all things that I stalk him and called him a rapist. None of this happened or does happen. And news flash for him... no one on earth would stalk the likes of him. Horrifying thought.

After my experience with this man and victorious lawsuit, (see https://www.zumayawinslawsuit.com/ ) I think he should not be allowed to come within a mile of a computer, let alone meander on those groups with well-meaning and unknowing folks. And according to Cindy Martin, those unknowing folks do not include her, nor Tracy Terhune, Simon Constable, Eleanor Gribbin, etc.

It is for this reason I share this bit of information on Albert Batista Morris... which in my opinion Bret coined from a grab of Valentino's brother's name and Michael Morris, who was very present against Bret in the summer of 2011 when the account was created. I honestly think the account was originally “Alberto Morris”.

I say buyer beware; Albert Batista Morris who claims to reside at the Brooks Cremation and Funeral Services...is David Bret.

* The sentiments expressed in this blog post are my opinion based on my decade of documented nightmarish experience and screenshots as proof of my statements will be forwarded to anyone upon request.