Regarding the "Handful of Depraved Friends"

I do not wonder why the Alberto Valentino family has historically expressed zero outrage at the Los Angeles County Hall of Records. That facility is charged with the safe keeping of all public records, yet they lost Valentino's entire case file. One would think a family might be unhappy about that and file a complaint, open an investigation... do something. They did no such thing and the first request for a search on site was filed by yours truly.

The reason why the family never filed a complaint? Because they, according to Donna Hill and Bill Self have that case file. Their silence on this and many other things related to their relative Rudolph.. has been and is still deafening.

I never began researching Valentino as an “obsessed fan” as I am called by the “team”. As I have said before, I began to write about the feminist aspects of the movie The Sheik and it all evolved from there. Not being a person prone to indulge in frivolous fantasy and movie star worship, I forged forward looking for proof and asking questions. The people I was asking knew perfectly well I was sincere in my research and they knew the answers to my questions. But instead of giving me those honest answers they closed rank and began to spread lies about me.

They allied in an open effort to discourage, isolate and defame me and called themselves “the team”. When I asked respectfully to interview the Alberto Valentino family, I was refused due to "the personal nature of their documentation." To me this was a revelation that their documentation should not be disclosed for some reason.

I have been compiling a chronology of the “team's” efforts to silence me beginning in 2010, but long before that... seven years to be exact, they were already at it. While I was working with Bob Ullman in 2003 to understand exactly what happened according to the court records I did find, word from the “team” spread that I forged those documents, that I was writing "pure fiction".

This is still going on with someone allegedly named "Cindy Martin" idiotically trying to prove I forged Paragraph Fourth, a lost page of Valentino's will which I recovered. And guess what? That original from which I made that copy...is on file in the Hastings Law Library! Maybe she should head on over and check that out.

Why is the Alberto Valentino family so accepting of the collectors' false narrative and their horrible behavior? Why are they not outraged at the Hall of Records for losing their relatives documents and furious with people claiming I forged the missing court records? Why are they not speaking out against the "team”? Maybe best to ask them.

This afternoon someone sent me a comment for this blog asking if I could address why I do not like the "Valentino Studies Community". First and foremost because no such thing exists. They are just the “team” under a new and ludicrous title. Maybe they could also use, “Cult of the Relic” or “Sadistic Bullies”... makes no difference because they are the same people.

When Father Michael Morris was being deeply defamed online by the “team”, he wrote me the following (see below). I realize in even mentioning his name I will be subjected to the “team's” rage as comments will fly in how I never knew him, how I took advantage of him and more blah, blah, blah.

I will say honestly that those comments and their silly new attempt at rebranding their bullying... becomes increasingly boring because brainwashed folks who worship relics get dull quickly. (From an e-mail sent to me by Michael Morris on October 22, 2015)

This quip (below) is excerpted from an exchange between Cindy Martin and Renato on May 29, 2019... to illustrate a point. 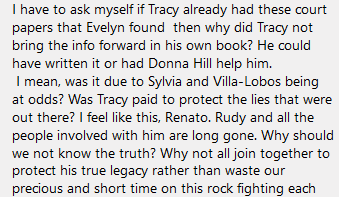 I think this subject has been put to rest and I did not "retype" any documents and insert Mahoney as a witness. (see below) And there is a great deal of coverage about this: From The Los Angeles Evening Citizen News, Feb. 5, 1931.