In November of 1951, Jean and Alberto Valentino appeared in Salt Lake City, Utah. Why? (From The Salt Lake Tribune, November 25, 1951)

Attorney Feiler represented Alberto for many decades as well as working with Joe Schenck's United Artists. George Ullman made a claim in his 1975 memoir that Alberto's litigations against him were funded by Schenck. I vetted the memoir, researched the various lawyers and found Ullman correct; all were at one point or another retained by United Artists. More about that in Affairs Valentino.

So why were Alberto and Jean in Salt Lake City, “killing time” by watching Dexter in Valentino? If they both lived in Los Angeles at the time why Salt Lake City? Because the laws in Utah then were very clear on the subject of making a movie about someone's deceased relative. In Utah you had to have the permission of the family. Alberto was preparing his lawsuit against Columbia Pictures and director Ed Small based on Utah's strict law and filed his case with the court in Los Angeles the following April. 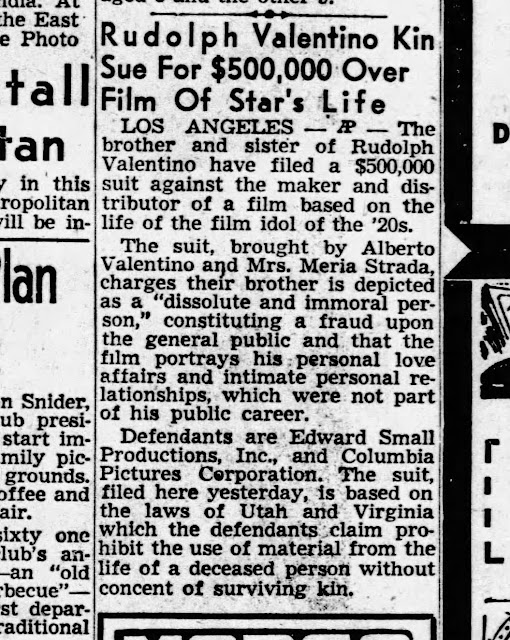 Sister Maria Strada filed her deposition from Italy and both Alberto and Maria claimed “annoyance” with the film, etc. etc. The case turned a real profit for them and in October 1952, they settled out of court with the rumored damages awarded around $500,000.

Despite this victory, incredibly some 20 years later when Alberto was interviewed by Jeanne De Recqueville, he told her he only got pennies from his brother Rudolph's estate. But back in 1951, Alberto and Jean did not waste time hustling up to Salt Lake City to get on that lawsuit. Morton Feiler on the job again and he must have made a fortune from Alberto because this was 30 years after he worked on Alberto's case v. Ullman.

*** In one other bit of Valentino court record business, I share this link again since there seems to still be some fuss being made about the validity of Paragraph Fourth. (see Affairs Valentino) Case closed.