In my opinion, the Register of Actions for Rudolph Valentino's estate, is an extremely informational document. Obviously debts incurred tell a story. We have published the entire document in the Affairs Valentino Companions Guide but this page (see below) got me to thinking.

We see that four months after Valentino' death, his close friend and trusted business manager George Ullman was receiving and paying a lot of bills. The entries on January 7, 1927 are many... with one entry dominating the page for me. That would be the claim made to Pola Negri for $15,000. By today's exchange rate that would have been $225,000. Not a small piece of change.

Ostensibly, she loaned the money to Rudy for renovations on Falcon Lair. But when news broke she actually petitioned her deceased lover's estate for the loan repayment, Pola came under brutal attack by Rudy's fans. Pola came back with the defense that she only petitioned Ullman for the money to give it to Alberto Valentino so he could afford to bring his wife and son to Los Angeles. As we know this did not happen for quite some time.

But Pola did give Alberto the money and she loaned it to Rudy. She would later sign another loan for Alberto; one he would not repay in full. I think this speaks well of this woman's generosity. I guess a great deal can be said about Pola Negri, but it appears she was not cheap.

And we see on this page, George Ullman was hard at work wiping out Rudy's debt. And I have no doubt in January of 1927, he thought that was a realistic goal.

At the bottom of this page you can see the payments due to the Polyclinic Hospital doctors. Dr. Meeker did not come cheap charging $3500. Today that would be a bill of $52,000. 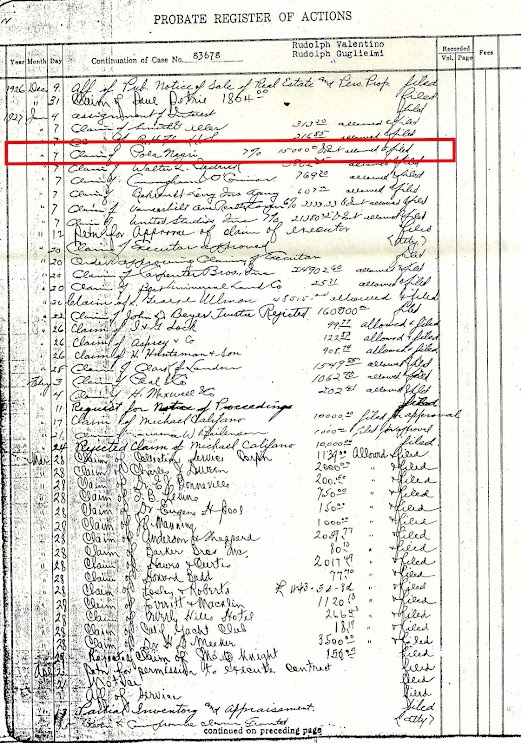