"Somewhat Hidden in his Tiny Office..."

“It was on the eve of Valentino's last trip from Los Angeles to New York, when I surprised him, somewhat hidden, in his tiny office attached to the rich library of his brand new mansion, Falcon Lair; perched high above the populated city of Beverly Hills. He was writing a love letter by hand and I could not help noticing it began with the eternal words, "My love," in English. It was not inscribed to his beloved Pola Negri. Was, then, the 'Sheik', in the disposition which most characterized him, in life as well as on screen?”

“Pola Negri entered her boyfriend's office that day and saw on his desk the letter which began with the eternal words "My love," as it was addressed to another woman. She did not pluck a single hair from the Italian actor's head! She remained as calm as if the epistle was something required as a prop for some movie.

Did she know it had a different significance, that it was destined for a real person and that Valentino was not working for any movie at the time? Probably, Pola could not conceive that Rudolph could love another woman and this was the reason for her unheardof trust.

Once, when she visited the studio where the movie The Son of the Sheik was being completed, she arrived just at the time when Valentino and Vilma Banky were engaged in an enviously tight and long-lasting kiss. Those around Pola at the time watched to see her reaction to such a situation. Very calmly and with a broad smile showing her confident happiness, the Polish actress told them, "He kisses Vilma, but he thinks of me.”

I guess the love letter could have been written to a number of women, but it makes me wonder who. Did the reconciliation with Natacha begin sooner, was this a secret lover who was never known publicly? Who was the lady and did she receive her love letter. And more to the point, where is that letter today?

The events in Falcon Lair before Valentino left for New York on his final trip east, as witnessed by Baltasar Cue make his account unique. Baltasar Cue's reputation as a respected journalist opened some doors for him as far as interviews and in the case of Valentino; an autobiography. Cue was not a gossip columnist, not a reporter rushing about trying to get some scoop. He was distinguished, hard working, sought after and talented. The "team's" efforts to demean the man by referring to him as a fan magazine hack is only because our names our on the translation of the book. He was a well-known journalist his entire life. Here a front page feature article he wrote about Marie Dressler in 1934. 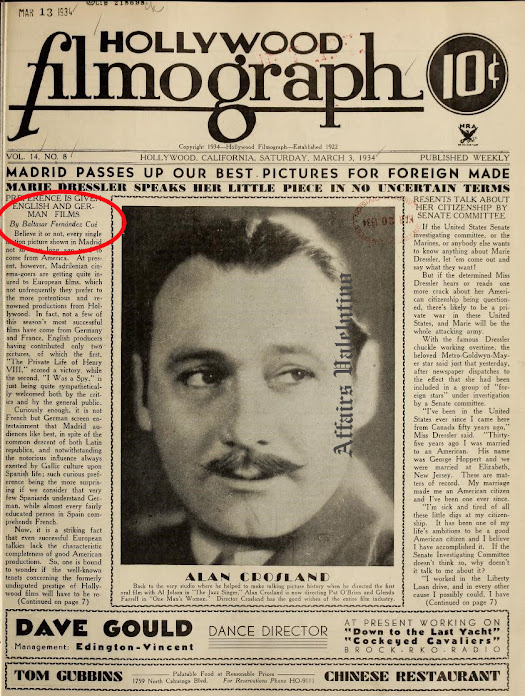