It is hard for me to believe that it was five years ago when Michael Morris passed away. He has missed some things which have happened since his passing: the revelation that Svetoslav Roerich's mother, Helena was the one to call her son home to India and break off his engagement to Natacha. Michael always thought it was the father, Papa Roerich who made the demand. He also did not know that the reason Helena Roerich called Svetie to her side was that she believed Natacha to be the reincarnation of Bathsheba. This was revealed to me by the Spanish Roerich Society as I completed Michael's Roerich chapter in Beyond Valentino.

Michael passed away not knowing that Natacha and Svetoslav lived together and were engaged for three years. I guess when we all go, fabulous things will not cease to be because life goes on. New things get discovered. But I hope in some way Michael does know.

I realize in posting this remembrance of my dear friend, the Valentino Gaslighting Narcissists will begin with their tired old comment provocation. They will chant in unison how I took advantage of Michael's work and his family to promote myself, etc. That is the provocation even though they know it is not true at all. Beyond Valentino was Michael and Renato's project in the beginning and I was acting as a behind-the-scenes collaborator.

When he died, it broke my heart to think of his work and dream being lost and forgotten. After working with him on the book for a couple of years by then I had all the materials, his plan was laid out, I knew what he wanted to do. I never doubted for one minute that I would do anything but work hard to finish his book and do the best job possible.

My name appeared on the book because the Superiors of the Dominican Order in Berkeley insisted this be the case and it was never a move by me to exploit Michael's death. The accusation this was my motivation is made by people who not only do not know me, but who will not stop trying to destroy me.

Michael was a deeply devoted supporter of me, my work and at a time when no one else was. He talked me through years of investigation and how he loved to be the detective. We were so excited with each discovery, each interview I did and he would anxiously await the phone call. I remember once talking to him from the airport in Irvine after an interview with Bob Ullman. Michael and I met many times over the years before I moved to Italy; often in cafes in Berkeley where we gabbed nonstop for hours about our topics: Rudolph Valentino and Natacha Rambova.

Every Christmas I gave him a gift of some brandy or cognac which I knew he loved. And he would say he would share it with the other priests in the house. When I lived in Los Angeles years later, he came to my home and on two occasions he cooked me dinner. We inspired adventure in each other as friends and made many, many great memories together.

The most precious memory I have of Michael is hearing his voice on the phone so chipper, “Hi E!!” He would never let me be discouraged about Affairs Valentino, always kept me on the path and when I wrote him I thought it a very bad idea to put my name anywhere on Beyond Valentino, he scoffed. He then wrote me that the “devil's brigade” would "hoot and holler" but we could never let them run our lives.

So I say to the “Devil's Brigade”, go ahead and, "hoot and holler", and send along your provocations. It only takes me a word or two to recognize the intent and then I slide it in the trash file. I know you believe you are doing God's work in keeping your noses glued to this blog, but when a priest refers to you all as the "devil's brigade", that might make you want to take pause.

Today I remember my great friend and supporter and send all love his way wherever he may be. Below a post he made on a Valentino chat room long ago which I cherish and below that a picture I took of Michael on one of our fun, adventurous days! 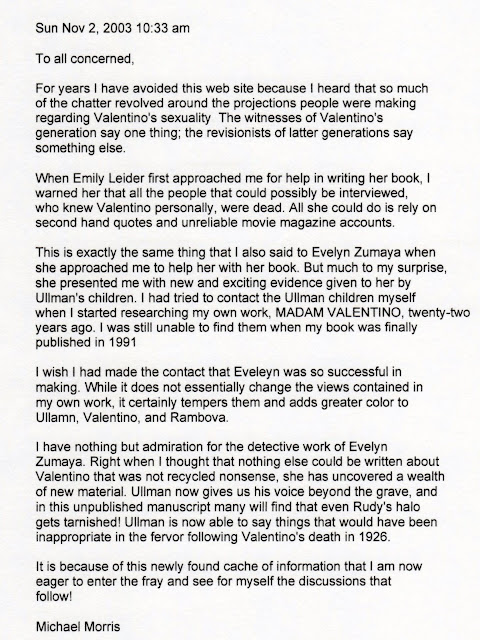 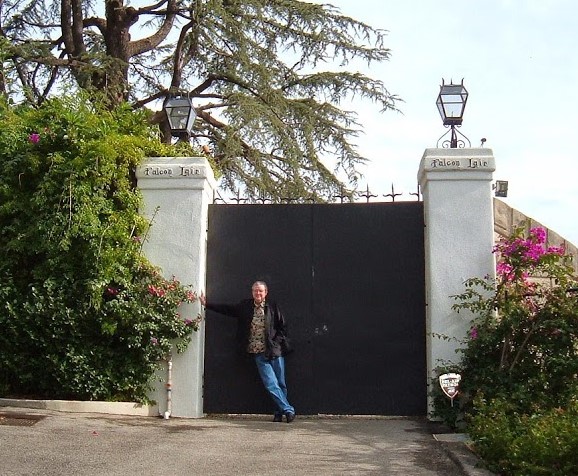 I never forget... for the record: