I really do not think Rudolph Valentino's story is such a Hollywood story. When I think of where he lived, where he based his daily life, I think of New York City for some reason. This said, I think there is plenty of evidence that he enjoyed life in Southern California.

When Renato and I visited Castellaneta, the first thing I thought of when I saw how the city was perched on the Great Gravina (great canyon), was the similarity with the location of Falcon Lair perched on the edge of its cliff. Was this "Hollywood canyon", Valentino's gravina? I think it was and whether consciously or unconsciously, he recreated his childhood imprinting of "home" with Falcon Lair. Of course it was a last gasp event in his ephemeral life but there it was.

For me one of the most powerful images in Aurelio Miccoli's The Infancy of the Myth, is that of the boy Rudolph and his relationship with the gravina of Castellaneta. A place to escape with friends, scampering up and down the rocks, a hideout and a landscape of great action.

When his life closed in on him the first part of January 1926, did he gaze down into the canyon from Falcon Lair and find some psychological escape? I like to think so.

There are beautiful photographs of the Great Gravina in Castellaneta in The Infancy of the Myth. And it makes me wonder how any of the children who played there survived. There are also rare photos of the folks who populated the boy Rudolfo's early childhood. The photograph of the stairs inside his childhood homes, the alleys where he ran with his first friends living his first adventures... it is such valuable imagery.

I asked Renato why I had this visualization of New York City being Valentino's home in America, more than Hollywood and he replied, “ Because New York City was his Taranto and Hollywood was his Castellaneta”.

The Great Gravina of Castellaneta! (From The Infancy of the Myth by Aurelio Miccoli) 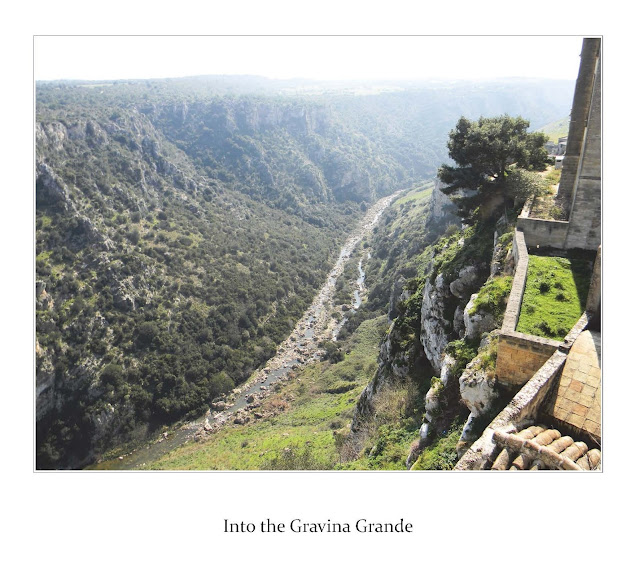